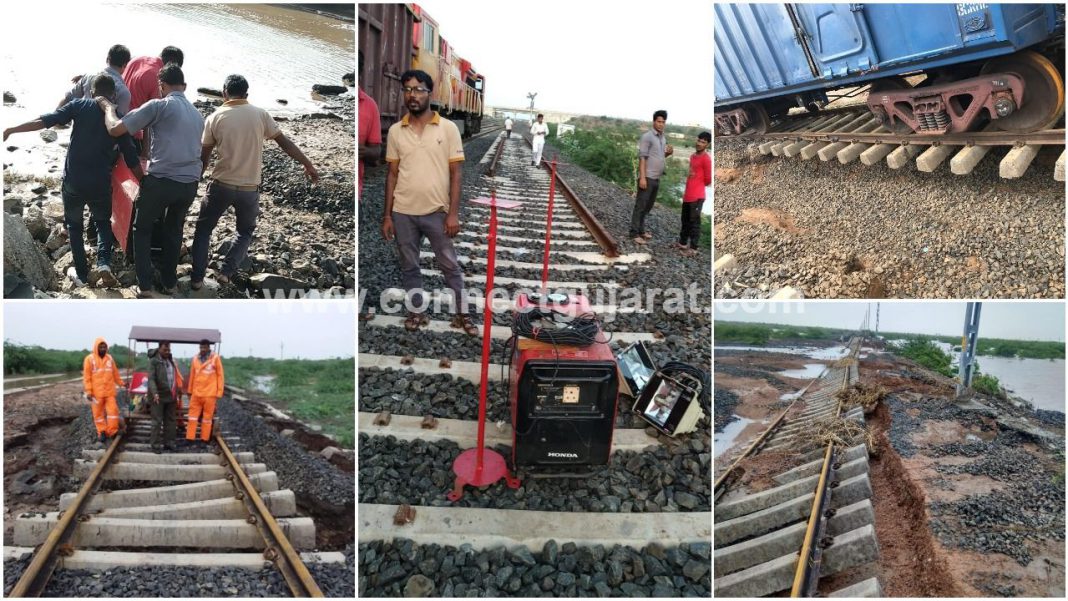 Several areas of  Mumbai and Gujarat in Western Railways jurisdiction affected due to heavy rainfall and were later restored with meticulous planning and coordination by the teams. Both the states received heavy and incessant rainfall in the past few weeks which affected the railways severely. Incessant rainfall, flash floods and release of water from dams due to rising water level resulted in water logging, breaches, washouts at certain sections, bringing the rail traffic to grinding halt and several passengers being stranded in trains and stations and also in railway colonies.

However, W. Rly dealt with this situation very valiantly and started the restoration work on war footing braving the continous rainfall both day and night. According to a press release issued by CPRO Ravinder Bhakar, survey of each of the affected locations was done by team of officers and the situation was closely monitored from Headquarters. The restoration works were well co-ordinated at all levels – arranging men, material and machines from nearby or far off stations. The required resources like rubble, quarry dust, ballast were arranged from nearest available Divisions and their movements were mobilized alongwith required manpower from the nearest possible locations. Contractual agencies and departmental manpower were deployed for restoration. Generators were arranged for day and night work. Also, the trains were regulated with utmost safety norms prevalent for train operations inorder to avoid any untoward incidents. The vigilant efforts by some of the foot soldiers also helped to avert major causalities.

The details of the sections affected are:

Vasai – Nallasopra – Virar region of Mumbai Division was affected due to incessant and heavy downpour on two occasions, first on 2nd July, 2019 and on 4th August, 2019 wherein some services were cancelled between Nallasopara and Virar and Vasai Road and Nallasopara. The rail traffic had to be stopped for some time as water levels were high on rly tracks with heavy water accumulation. The water level on rly tracks at Nallasopara had risen very high making it impossible to run trains between Nallasopara and Virar.

The restoration work started in full swing by mobilizing resources such as manpower, rubbles, Quarry dust, Pumps, lighting arrangements. The work was undertaken on war footing day and night, inspite of the heavy rainfall. Inflatable rafts were procured by Vadodara Division for rescue operations in reaching out to the affected which was for the first time in W. Rly.

Ahmedabad Division experienced the fury of rainfall on 10th August, 2019, wherein various sections Katosan Road – Mehsana, Viramgam  – Samakhiali  – Palanpur , Samakhiali – Gandhidham  were disrupted due to heavy rains & flooding of water, release of water from Machchu dam and flooding of wateron railway tracks from nearby areas. Heavy rainfall of 370 mm was experienced at these regions in a short span of 8 – 10 hrs.

The restoration work started in full swing on all the affected sections immediately. In the  Viramgam – Mehsana section resources such as manpower, 40 ballast hoppers, 12 wagons containing rubble & Quarry Dust, 75 trackmen were mobilised. Officers were also deputed for better co-ordination and supervision to ensure immediate restoration of traffic. After unloading of ballast and tamping by machine (Unimat No.8287), the Katosan Road – Mehsana section was restored on the same day i.e. 10/08/2019 by 06:45 hrs. For restoration of Maliya Miyana – Samakhiali section, Departmental labourers (100 of Ahmedabad Division & 150 from other divisions of Western Railway), 20 wagons of material (15 rubble + 5 Quarry Dust), 40 ballast hoppers and 2 JCB machines were deployed for restoration of traffic. Officers were deputed and the entire section was restored on 11/08/2019 at 22:55 hrs.

250 Trackmen of Rajkot division, 50 Trackmen of Bhavnagar Division, 8 Permanent Way supervisors, 3 ADENs were deployed, considering the extent of damage and the quantum of disruption.  Therafte, on 12.08.2019 nine nos of pocclain/hitachi, 70 Nos of dumpers, 02 Nos of JCB, 01 Roller and more 200 Labours were deployed for track linking. The section was restored on 15th August, 2019.

The restoration works on all the sections have been completed with the dedicated efforts by the staff and officers alike. The employees who showed exemplary work beyond the call of duty were felicitated and rewarded on the occasion of Independence Day. A. K Gupta – General Manager, applauded and appreciated the painstaking efforts put in by all the railway staff, working tirelessly even in such extreme condition to put the railway back on tracks.