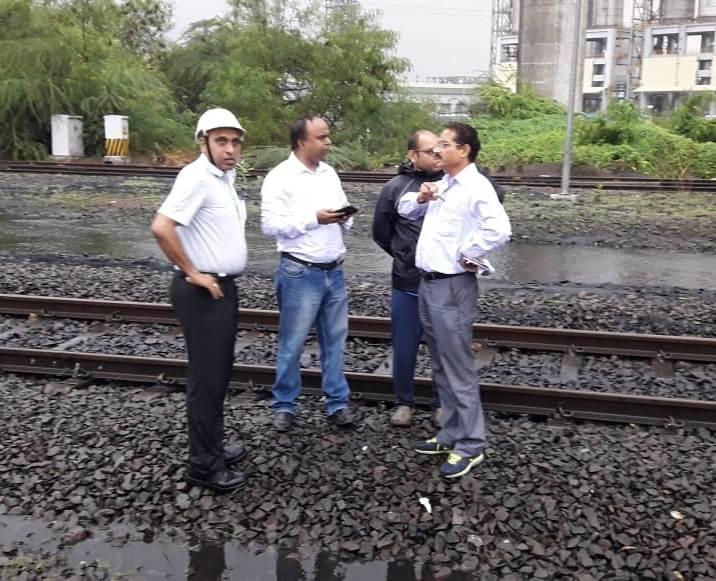 This year during monsoon the western parts of the country along with several areas in Gujarat state witnessing heavy and incessant rainfall affecting the rail movement. Water logging, breaches, washouts lead to disruption of services with several passengers being stranded in trains and stations at various locations.

With such situation the railway machinery get into work on war footing and restored the lines in affected regions. Some areas witness heavy rainfall like never before and the worst affected was the Kanalus area in the Jamnagar – Okha section of Rajkot Division. The metre gauge section of Prachi Road – Delvada in Bhavnagar Division also experienced the fury of nature.

The rainfall received by Gir Somnath and Junagadh is more the annual district average recorded for the past 5 years. The incessant downpour in the coastal districts of Saurashtra region of Gujarat from 17th July, 2018 damaged the tracks & caused breaches at Kanalus station in the Jamnagar – Okha section of of Rajkot Division. There were disruptions in rail traffic due to water logging resulting in the soil formations under the lines being washed out. Rail traffic was immediately suspended with several trains being regulated, short terminated and cancelled.

Bhavnagar Division of Western Railway also witnessed severe damages to tracks due to heavy downpour of rainfall. On 16th July, 2018, Train No. 52950 had to be stopped on track between Gir Gadhada and Gir Harmadiya stations due to water logging on the Prachi Road – Delvada Metre Gauge section of Bhavnagar Division. The water had accumulated upto 225mm above the rail level.

The situation was informed to Engg. Control who was foot plating the train. It was then decided to back the train as it was observed that the level of water was rising fast. On getting clearance the train was backed to about 2 km from the present location. However the water level was rising at that location too and the train was stopped and decision was taken to inform NDRF and local administration. The heavy rainfall had caused severe damage to the tracks with the shoulder and crib ballast being washed out at several places & at same locations had caused earth cut on embankment.

P B Ninawe Divisional Railway Manager of Rajkot Division and senior officers along with workforce and equipment immediately proceeded for the site. A K Gupta, General Manager of Western Railway took stock of situation from DRM – Rajkot and closely monitored the restoration work from Control Room in Head Quarter Office at Churchgate. Maintenance / Restoration materials were rushed to the site by a special train consisting of 15 wagons. Since, this area was never affected before by such incident, drone cameras were used for aerial survey & to assess the source and pattern of flow of water on tracks.

After examining the footage, necessary remedial action was planned & more repair material was brought in from other divisions viz. 5 wagons from Bhavnagar, 14 wagons from Ahmedabad, 30 wagons from Vadodara. 80 Dumpers were pressed into restoration work. The restoration work was carried out relentlessly on war footing inspite of ongoing heavy rainfall. As a result of this continuous restoration work being carried out by Railway staff and officers on war footing, out of total 4 lines, rail traffic was restored on line no. 3 and 4 at 17.50 hrs and 20.10 hrs respectively on 17th July, 2018.

Three goods train were first run on the restored stretch of tracks at Kanalus for ensuring proper safety of the passengers. Later Tuticorin – Okha Vivek Express was the first passenger train which run on line no. 4 in the early morning on 18th July, 2018. The restoration work of line no. 2 was completed in the evening on 18th July and finally line no. 1 was restored on 19th July, 2018.

In order to tackle the crisis at Bhavnagar, the NDRF teams (at Jamnagar and Una) were immediately contacted by the DRM and also alerted the local administration. Teams were moved by the agencies (NDRF moved from Una and local police from near the vicinity around Harmadiya), towards the location of the rake. The affected metre gauge tracks have still not been opened for traffic as a precautionary measure.

The railway administration also help the stranded passengers by arrangement of buses and food packets for passengers. 16 buses were hired for transporting about 973 passengers of Okha – Mumbai Central Saurashtra Express, Mumbai Central – Okha Saurashtra Mail, Okha – Rameshwaram Express, and Puri – Okha Express. 750 food packets, snacks, tea and biscuits besides arranging food from 2 Pantry Cars in the train, was provided for the passengers stranded in these trains due to breaches at Khambhaliya, Jamnagar and Dwarka stations.