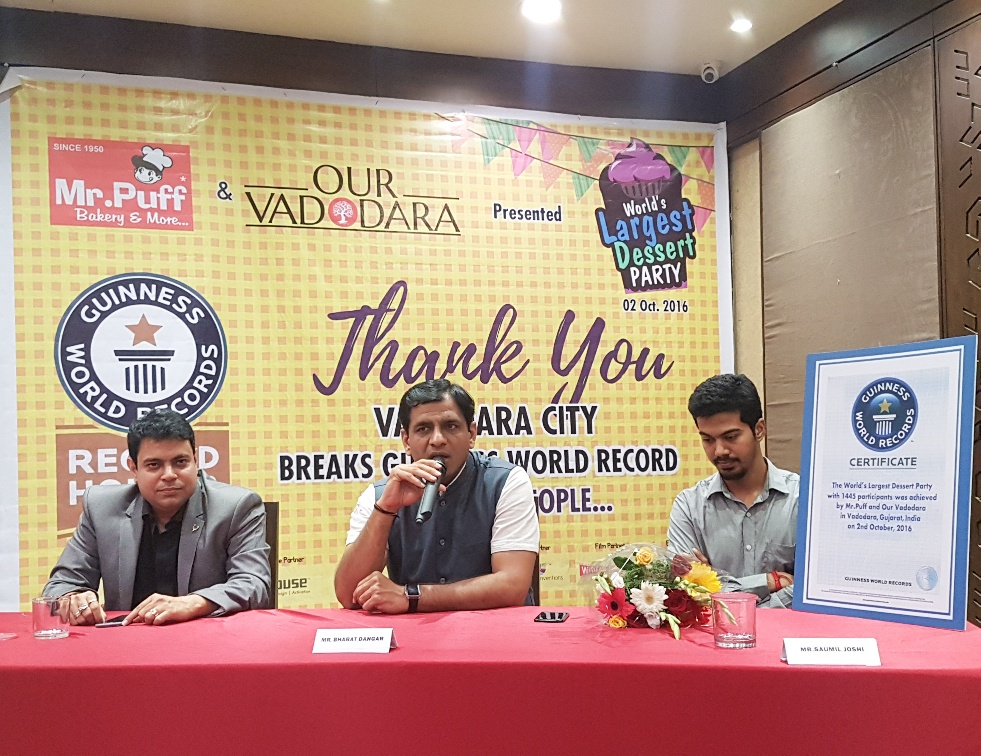 A grand celebration had taken place on the birthday of Mahatma Gandhi, on 2nd October 2016. Our Vadodara hosted an event in association with Mr. Puff in an attempt to break the Guinness World Record for the ”World’s Largest Dessert Party”. To break the Guinness World record, each participant was given three different cupcakes, and everyone had to consume at least one cupcake. Mr. Puff is a leading brand in the bakery business in Gujarat while Our Vadodara is a social start up based in the city. Both of them joined hands and created this event. Along with this, seeing a huge number of people enjoying the event was pure happiness seeing themselves breaking the record. Every person had a day of sweetness as they had varieties of desserts. Mr. Puff also celebrates its 67th anniversary on this very day.

Dr. Vinod Rao (Municipal Commissioner) and Mr. Bharat Dangar (Mayor of Vadodara City) were the chief guests at the party. They came along with their family members to be part of the record breaking event. The previous Guinness world record for the largest dessert party was set by 1,166 participants and was achieved by Equal (Hong Kong) in E-Max, KlTEC, Hong Kong, China on 2 May 2016. This time, Vadodara took part to set a record and came out as record breakers! The party consisted of 1,445 participants and was achieved by Our Vadodara and Mr. Puff in Vadodara on 2 October 2016.

Co-indecently, the PM of India, Mr. Narendra Modi had announced about Swachh Bharat Abhiyan on the same day. This is a campaign by the government of India to clean the roads and improve the infrastructure of our country. So the dessert party was sort of a ”Muh mitha karo, Saher Swaach ho raha hai!” On 2nd October Vadodara witnessed a Guinness world record attempt for largest dessert party. The record is of Maximum number of people having a desert party at one place.

On the anniversary of oldest bakery of Vadodara the record was attempted to celebrate Gandhi Jayanti as well as to promote the Swachh Bharat Abhiyaan.

The organisers said they want to take Baroda on the world map and as far the registration is concerned they are way ahead of the previous record. The organisers wants to attempt the record of ‘World’s Largest Dessert Party’ and for that the organisers send the video recording and others documentation to the Guinness record committee to claim their attempt.