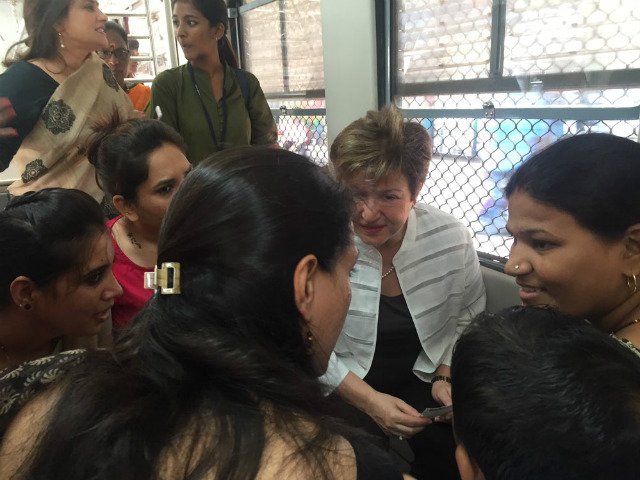 Georgieva travelled in a second class ladies compartment from Churchgate to Dadar, the busiest terminus on the suburban network.

Earlier, at the MRVC headquarters, Georgieva was given a brief presentation on the status and progress of various World Bank-funded railway infrastructure projects for Mumbai and surroundings.

She took a short tour of the iconic Churchgate station and Western Railway headquarters and around 11 a.m. boarded the train with a team of 20 others. She got off at Dadar.

En route, she chatted with the women commuters on various aspects pertaining to the city’s suburban services, which ferry over eight million commuters daily on three networks.

Many commuters requested Georgieva for selfies and she obliged, clicking her own photos as well, both in the train and on the platform.

Later, she proceeded for other site visits organised by the Mumbai Metropolitan Region Development Authority (MMRDA), including a school catering to slum dwellers and children with special needs.

Georgieva’s other major engagements in Mumbai include a meeting with Reserve Bank of India Governor Urjit Patel and Maharashtra Chief Minister Devendra Fadnavis.

She will also meet policy makers in New Delhi.