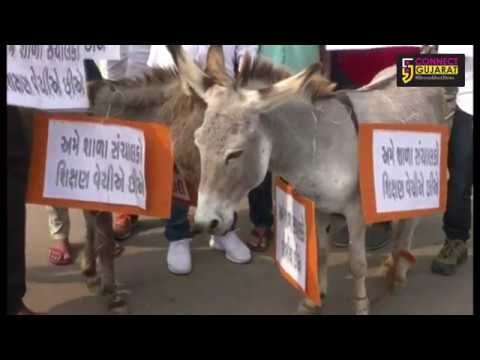 In view of the call given by Gujarat Vali Mandal for a one day bandh the parents in Vadodara raised their protest in unique way. They put placards on donkey to protest against the schools running regularly. Moreover they visited other schools and requested them to close down in support.

The Vali Mandal is fighting with school managment for the past many months on the matter of charging hefty fees from the students. Taking their fight forward they called for a one day bandh on 12th January and Vadodara is also not far behind.

The Vadodara Vali Mandal here also make sure that the schools support them in their fight and went to those running regularly. Take one step forward they use donkey to put placards and raise their protest. They also threaten to agitate aggressively if the schools not implement the fees regulation till 17th January.

"The schools are not implementing the highcourt order forcing and threatening the parents to deposit fees. But the Vali Mandal without any fear don't send their children to the schools and make the band successful," said Kishor Pillai spokesperson of Vadodara Vali Mandal.

The Vali Mandal gathered in the morning and went to Ambe school Karelibaug, DPS Kalali and other schools to request them to close the schools. In Ambe school there is a heated argument on the matter of closing the school.

In Shreyas school Manjalpur the Vali Mandal reached there with Donkey with placards on them. They shouted slogans against the school managment and raised their protest.

The Vali Mandal further said and threatening to agitate aggressively if the schools failed to implement the highcourt order of fees regulation.