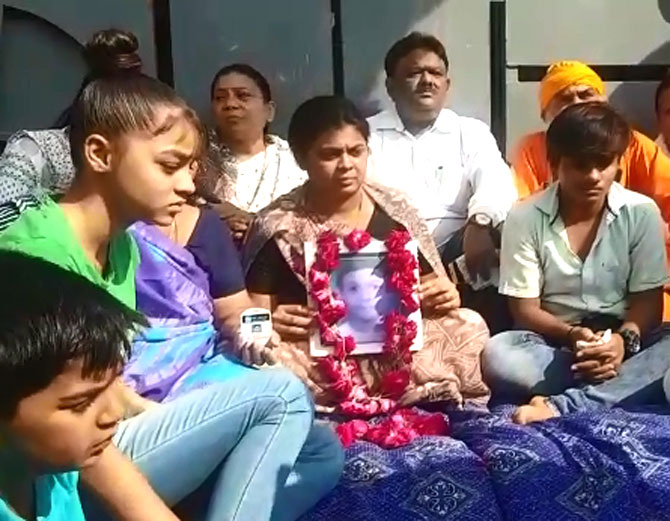 Gujarat Vali Mandal along with parents of Het Chauhan gives tribute to him on Monday and demand to remove the school situated on the road joining the expressway. The 6th standard student was mowed down by the ST bus while he was on his way to take part in the cyclothon event organised by the school.

On Sunday the Ambe group of schools organised the cyclothon event where they called the students to report early morning at the Jai Ambe School the starting point of the event. Het Chauhan studying in 6th standard was also on the way to his school but destiny had something else in mind. Before he reached the school the rashly driven ST bus mowed down the innocent boy.

The incident shook the whole city with parents reached the school to show their anger. On Monday the members of Gujarat Vali Mandal, parents and family members of Het Chauhan, his classmates and their parents and many others gathered at the spot and gives their heartfelt tribute to the boy lost his life.

Naresh Shah from Gujarat Vali Mandal demand to remove the school from the spot or else many students will lost life in coming days. He also demand to register case against the school administration and State government shall intervene in the investigation.

Het Chauhan’s mother said the road always has heavy traffic and she lost her son due to this. She request the authorities to make ellobrate arrangements there to prevent such accident and save precious lives.

The school was closed today in respect of their student Het Chauhan but none of them were seen at the tribute programme organised by Vali Mandal.