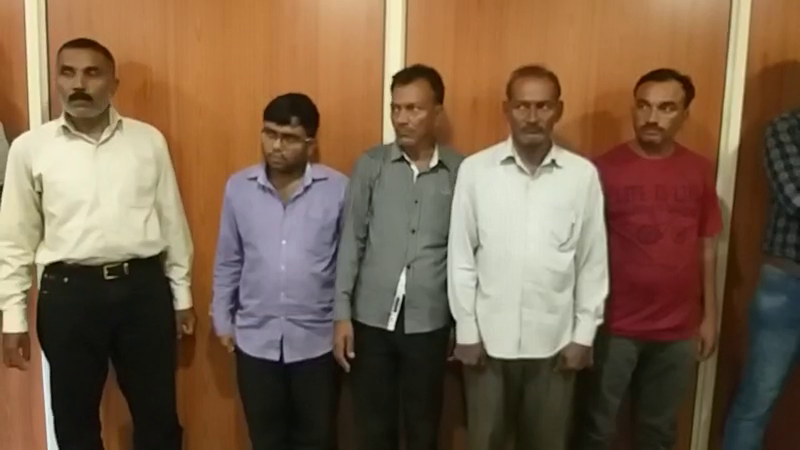 Collected 36.35 lakhs from 176 candidates till date

Vadodara SOG team busted a gang, cheating people by promising railway jobs to them. The team recovered bogus appointment letters, training certificates from the spot and arrested five people involved in the scam. The accused pretended to be the railway officers and cheated people for around 36 lakhs till date.

As per details given by SOG team, they received information about the railway recruitment scam running from the office named Shreeji education inside Sunrise complex at Waghodia road area of the city. One person named Anil Patel and his associates are luring youths in the name of New Delhi railway recruitment board and cheats them. They make them fill the forms and conduct exams at various centres and issues appointment letters of various posts collecting hefty money from them.

Based on the information the team raided the office and caught Tushar Purohit ( Amrutvila Apartment Ahmedabad), Anil Patel ( Sayajipura village Vadodara), Shailesh Soni (Waghodia Road Vadodara), Sursingh Rathwa (Bapod village Vadodara) and Manoj Vankar from the spot. The accused present themselves as RRB President, Vice President, Senior Writer Clerk, and peon before the candidates and till date filed up to 176 application forms. They promise to provide jobs for various railway posts and collects 5%commission from them and conducts exams at centres in Vadodara and Jaipur.

The accused till date collected 36.35 lakhs from 176 candidates cheating them with bogus documents for railway board. The whole stationery is supplied by a person named Urja Pal, authorise signature of S.P. Singh declared wanted in the matter. The money collected was send to Urja Pal living in Delhi. Out of the arrested case of rioting was registered against Tushar Purohit in Gotri police station and bogus documents case at Harni police station againt Shailesh Soni. Police is further investigating about involvement of any railway employee in the matter.