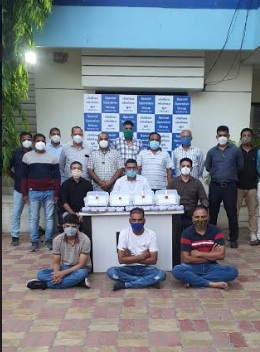 Vadodara SOG arrest three for running a drugs racket in the name of Dev Enterprise. The accused are illegally selling the Pentazocine Lactate injections after ordered them illegally without any valid permit.

As per details the SOG team received a information about one Vijay Panchal was about to deliver the Pentazocine injections to one Suraj Patel in his auto rickshaw near Mother school. Based on that the team kept a watch and caught three persons along with the rickshaw and car.

The team arrest Vijay Panchal, Suraj Patel and Harish Panchal all residents of Vadodara along with 906 Pentazocine Lactate injections without any valid permit, mobiles, cash, rickshaw and car. A offence is registered in Gotri police station under NDPS act.

Talking about their modus operandi, the accused under the guise of Dev enterprise pretend to engage in business of chocolate, sanitary pads and tea boxes. But instead they are involved in selling the Pentazocine Lactate injections to the youths after ordered them illegally without any valid permit.