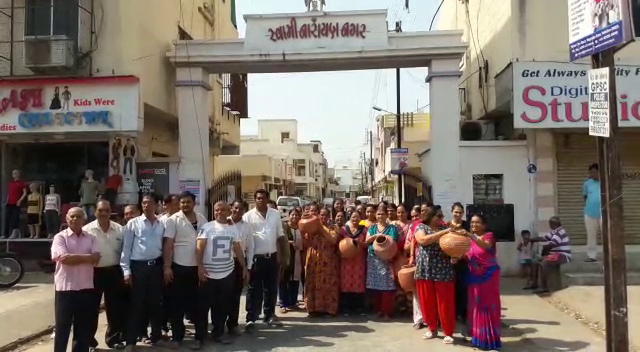 Residents of societies in Waghodia road broke earthen pots to show their ire against the polluted water supplies to them. They reached the corporation ward office to protest and decide not to pay the taxes. Meanwhile the corporation authorities starts cleaning the water treatment plant at Nimeta following the complaints by the residents.

Residents of east and western areas are receiving polluted water for sometime and inspite of many representations the problem still continues to trouble them. As the summer already set in the residents of Waghodia road and Tarsali areas broke earthen pots to show their protest against the administration. They shouted slogans against them and allege to be in the grip of water borne diseases.

Standing Committee chairman Satish Patel said they already started to clean the treatment plant at Nimeta and later will clean the Bapod, Nalanda, Tarsali water tanks. He further said the water released from the treatment plant reached the tanks is drinkable but later it became undrinkable. They are examining the possible reasons for the polluted water and will soon solve it.