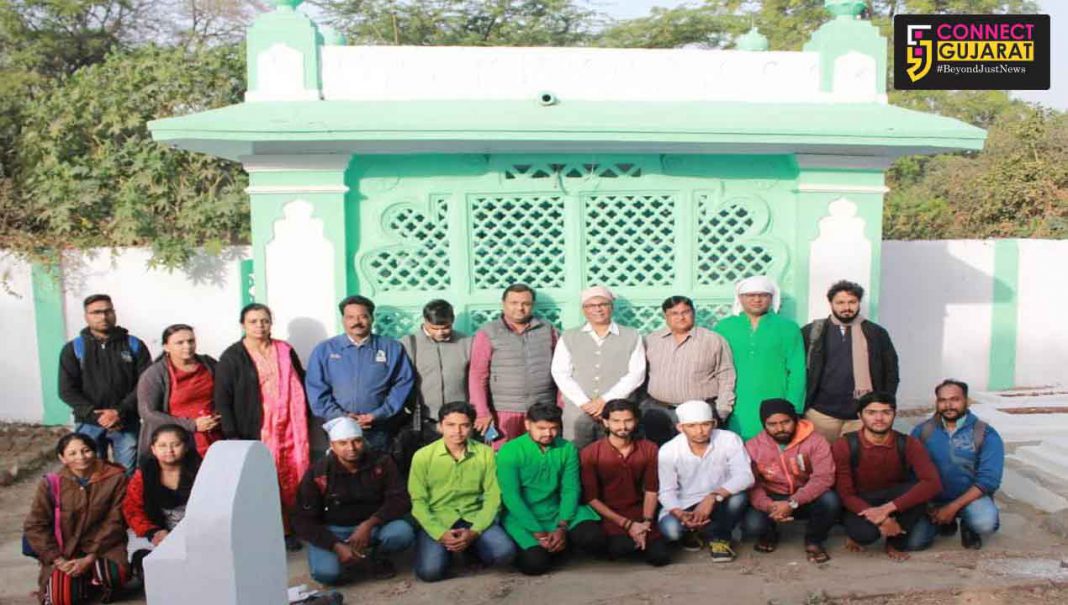 Student, teachers of Performing Arts and VMSS offered Chadar at his Mazar

Today is Aftab e Mausiki Ustad Faiyaz Khan’s birth anniversary who was one of the Navratna’s of Sir Sayajirao Gaekwad and also the Raj Gayak at that time. Musician late Ustaad Faiyaz Khan demanded 100 rupees from Sir Sayajirao Gaekwad as salary for main musician in his darbar. On Friday students and teachers of Performing Arts along with VMSS officials offered Chadar at his Mazaar near Khaaswadi crematorium in Vadodara.

Ustad Faiyaz Khan was born in Agra Musician family in 1880 and lost his father at a very tender age of just when be was four years old. After lost his father he came to his mother’s house and started to get training in music. Such was his dedication that he profound himself in Drupad, Khayal, Tappa, Thumri and Gazal.

As the aura and achievements spread everywhere Sir Sayajirao Gaekwad also not left behind to influenced by him and in 1912 invited him to join as main musician in the Darbar and also principal in Music Vidyapeeth. When asked about the salary he clearly told Sir Sayajirao Gaekwad that he would take 100 rupees and not less then that. At that time big Ustaad’s accept 40 to 50 rupees.

But Sir Sayajirao Gaekwad accepted Ustaad Faiyaz Khan’s Salary as 100 rupees after witnessing his achievements. And also he was allowed to perform in outside programmes also. His voice in Gramophone record was like the true voice of Indian music and from the time till his end Ustad Faiyaz Khan made Vadodara as his Karmabhoomi.

Many students of Sangeet Vidyapeeth in Vadodara along with many other musicians from outside learned from him. Like Aala Hussain from Kolkata, Dilipchandra Bedi, Latafat Hussain, Smami Vallabhdas, Principal of Lucknow Morris college Ratanjkar, Bhishmadev Chatterjee, Malkajaan and Kundanlal Sehgal from Agra and many more learned from him.

His Mazaar is in Vadodara near Khaaswadi crematorium where like every year the students of Performing Arts and VMSS offered him Chadar on his birth anniversary. VMSS also named the Patthargate Lakdipul road after Ustaad Faiyaz Khan and many people even don’t aware about it.