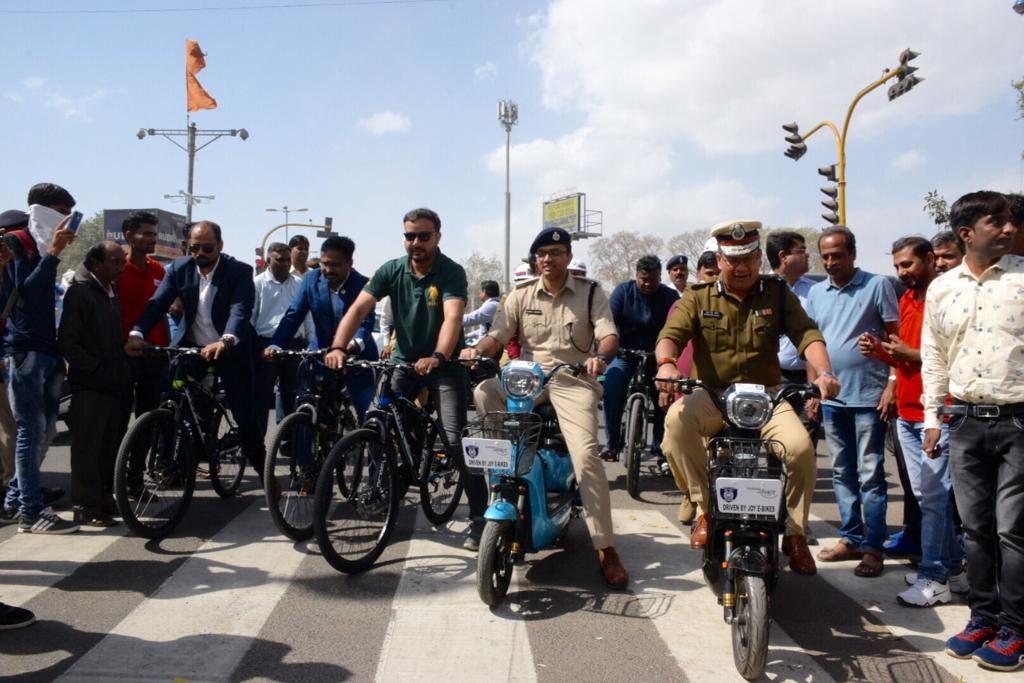 Sending a positive message in the society to follow traffic rules.

Sending a positive message in the society Vadodara police commissioner and DCP Traffic Yashpal Jagania ride on e bikes between the city traffic. The e bikes are launched in the city as part of the 30th Road Safety week celebrations in the city.

It’s a inspiring sight for the people of Vadodara as the top cop Anupam Sinh Gahlaut and DCP Traffic Yashpal Jagania ride the e bikes launched as part of the Road Safety week celebrations in the city. Both senior officials were joined by others as they passed through busy traffic on Mandvi road one of the prone areas in the city.

The department is taking various steps to sensitise people towards following traffic rules and as a part of the 30th Road Safety week celebrations the joy e bikes were launched and distributed by the police commissioner. The 7 e bikes were distributed at Maharani Nursing home cross roads given by Ward Wizard solution India Pvt. Ltd. Makarpura. A traffic zone was also inaugurated at the same spot by the department with the help of Beyond 360 company Ahmedabad.

Ward Wizard Makarpura CEO Yatin Gupte first handover the five electric cycles and two electric scooters to the commissioner. The same bikes were distributed to the traffic department for patrolling inside the small lanes of the city.

That after the traffic zone was inagurated by the commissioner and handover it to the DCP and ACP traffic.

Later on police commissioner, DCP Traffic along with other officials ride the e bikes till Mandvi sub control room and also distributed booklet and leaflets of traffic rules to the people.