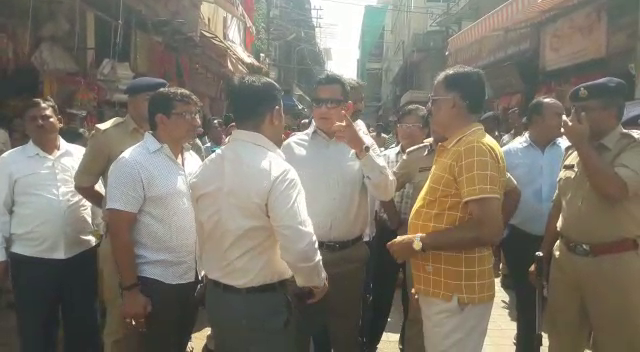 Commissioner of police Anupam Singh Gahlaut along with other top officials visit the ever crowded Char Darwaza area of Vadodara city in view of their action plan to provide security to the jewellery showrooms, angadias and finance companies. They met the owners and issues important guidelines about the security measures ahead of the upcoming diwali festival.

Vadodara police make action plan in view of the upcoming diwali festival where people do bumper shopping of jewellery and other items. The aim is to keeping a watch on jewellery showrooms, Angadias and finance offices where big amount of cash transaction will be done as part of the festive season.

Diwali is just round the corner and people are already starting their shopping before the celebrations with their families and friends. This is the time when people do bumper shopping of jewellery, clothes at the showrooms and shops. This is also the time when banks and angadias do big cash transactions which also increases the chances of crime. 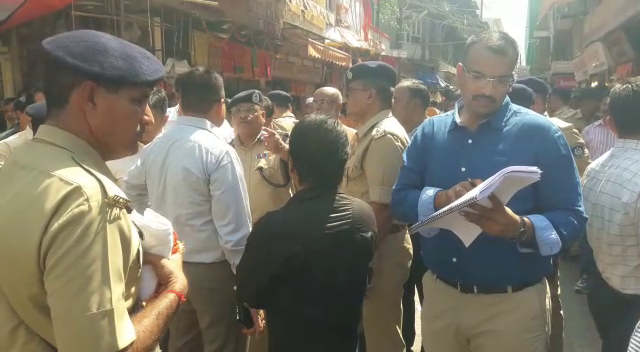 “We decided to deploy our teams in the areas witnessing lots of crowd during diwali. This is the time when people do bumper shopping which also increase the chances of crime specially in the old city area. Our teams do continuos patrolling in the area and keeping a watch on suspicious activities. As precautionary measure during peak traffic we are restricting the auto rickshaw movement from 5 to 9pm in the area. Parking facilities, deployment of SRP jawans and cctv cameras are the other things which we are going to imement as security measures. Finally we asked the angadias to get the police bandobast while they are moving with big amount of cash as a safety measure,” said Gahlaut.

As part of their action plan the police decide to deploy the teams at areas of Ghadiyali pole, Sardar Bhavan line, Kansara pole, Alkapuri, Jetalpur road. Special patrolling by Crime branch, SOG and PCB at MG road, Gorwa, Gotri, Manjalpur and Sama. Police team with weapons do special patrolling and checking at jewellery showrooms, Angadia and Finance offices. The teams also note down the time and date for the people security.

Further more best quality cctv will be installed by the owners of jewellery showrooms, Angadias and Finance offices monitored by personal staff. The verification of security guards will be done by the police at the showrooms and offices. Round up of the suspicious movements and the owners must provide the details of new employees and the previous employees left the job to the crime branch.

During this time people often head for diwali vacations with their families and during such time the police will keep special watch on such locked houses. In view of terrorism threat police do special checking and patrolling at railway station, bus stand, crowded places,Malls, multiplexes, hotels, dhabas and religious places in the city. The teams also detain the accused involved in various offences in the city.