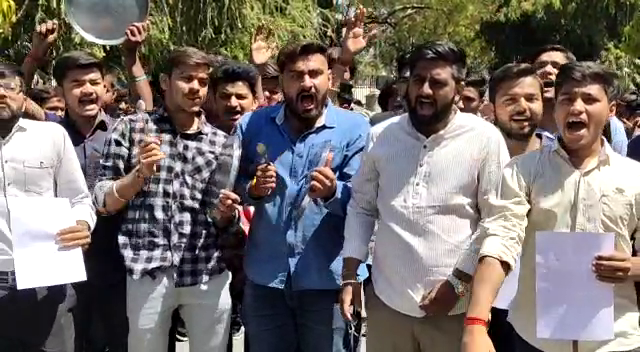 Vadodara MSU GS Rakesh Punjabi was unconscious and taken to hospital after a heated argument with vigilance team at the head office on Thursday. The All India Gujarat Student Union went to the head office demanding results of different faculties and the incident happened after the argument. Students sing Ramdhun at the spot in protest against the university.

Students leaders of the university demand the results of many faculties pending for quite some time and give representations in different occasions. However with no resolution to their demands All India Gujarat Student Union reached the head office on Thursday to gives a memorandum in this regard to the vice chancellor.

However the vigilance team stopped them from entering the office and both went into heated arguments. In between the chaos UGS Rakesh Punjabi lost his consciousness and he was rushed to the hospital for treatment. The students then raised slogans against the university authorities and vigilance team and sing Ramdhun as part of their protest.

Rakesh Punjabi threaten to sit on fast if the university failed to declare results of the students soon.