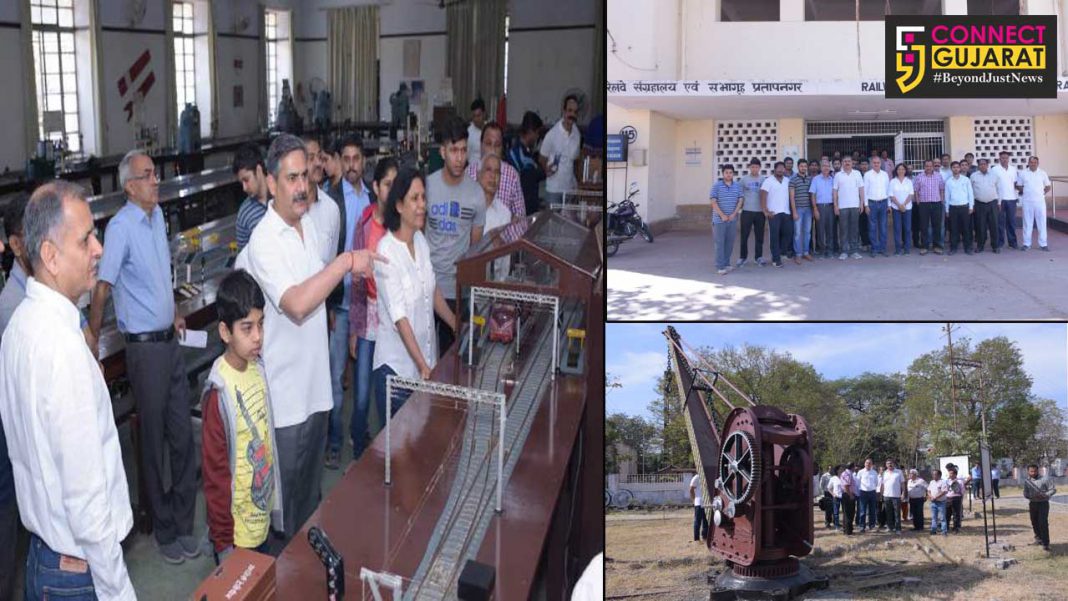 Took the visitors towards the heritage value and glorious history of the railways.

Indian railways is celebrating February 2019 as heritage month and in view of that Vadodara division organised a heritage walk on 23rd February. The walk from rail academy to railway museum took the visitors towards the heritage value and glorious history of the railways.

A exhibition is also put up at platform no. 6 at Vadodara railway station on the occasion of heritage month where old bells, token window, badges, seal, holograms, patromax, drawings are on display for the passengers and visitors.

Some of the glimpses of the heritage walk is shared by the railway department to the visitors.

• This place was built up by Maharaja Sayajirao III for his eldest son Fatehsinhrao.
• This place was designed by Charles F Stevens  son of famous F. W. Stevens the British architect who designed the famous V T Station of Bombay.
• Construction of this palace was started on February 15th 1908 and completed on July 30th 1914.
• Prince Fatehsinhrao died in 1908, but in the same year he was blessed with a son Pratapsinhrao and the palace was named after him.
• The entrance of the palace is adorned by exquisite carving and the palace is noted for its architectural grandeur highlighted with columns, arches, carving of creepers, flowers, leaves, birds and animals. The inspiration for the design of the columns and arches has been drawn from South India, Central India and  North India.
• The Bombay Province had taken over this Premise on a lease on January 31st 1949.
• Subsequently it was given to the Indian Railways for its use. The Railways purchase this building on January 6th 1964 at a total value of Rs. 2438271/-
• This beautiful palace was converted into the Railway staff college in 1952. Indian Railways had declared it a heritage building.

• Palace Tunnel:  A tunnel was built connecting the main palace building with kitchen (now Bungalow No. 2) to transport the food items from kitchen to palace with the help of trolleys.

In 1860, the Maharaja Khanderao Gaekwar financed 2 feet 6 Inch gauge line from Dabhoi, an important centre on one of the old trade roots, some 29 miles southeast of Baroda, towards nearest part of the BB&CIR main line, at Miyagam, itself some 20 miles South of Baroda.

In order to preserve and showcase heritage of GBSR, Vadodara Division has developed Narrow gauge Heritage Park Rolling Stock Park, Rail Museum at Pratapnagar which offers an unique opportunity for the rail enthusiasts and lay public alike.  It offers a vast array of artifacts which have served their purpose with elegance in the running of the great national enterprise.

Different therapies are being used to treat Covid patients in Vadodara...