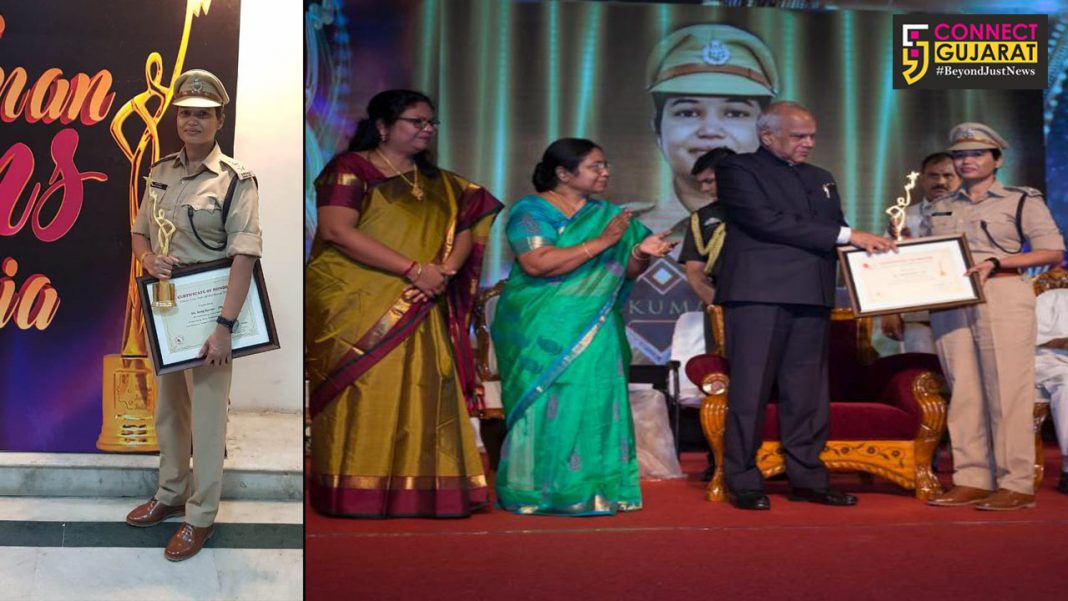 Said inspires her to work harder towards a better society.

It’s a recognition worth for her good work towards society and sensitise people towards a better society. Working tirelessly for the betterment of society Saroj Kumari is one such dynamic lady who makes it a mission in life to help women live with dignity in the society.

The Woman Icon Awards celebrates and honours the contributions of women who have excelled in different fields. The Woman Icons are those who have displayed their exceptional capacity in the field of their choice. The aim is to facilitate a platform for women achievers to celebrate their achievements in the society. The effort also empower the younger generation and ignite them to be a noble contributor to the society.

Saroj Kumari is felicitated by Tamil Nadu governor Banwari Lal Purohit in a glittering ceremony at Chennai. She won the award in ‘Woman in Unifrom’ category for her campaign Samajh Sparsh Ki spreading the awareness about sexual harassment in the children.

“The campaign was started on 19th July 2018 with an aim to sensitise the children about do’s and dont’s of sexual harassment. We started from a core team of 12 members and target the schools, parents and teachers to spread awareness about the subject by conducting live workshops and sessions. Later we spread our area of working to social functions, festivals, Children homes and even volunteered in the famous Garba. We also organise a run for Samajh Sparsh Ki to reach people more effectively,” said Saroj Kumari.

The campaign is one of its kinds in the country and need a special effort to reach to the larger part of the society. “We don’t want to limit the Pathshala to Vadodara city and use the social media platform to reach larger part of the society. We shot and upload videos under Online Pathshala to spread the message in multilingual and with rich visual effects. Recently we launched ‘Suraksha Sutra’ a pack of 10 cards with a QR code imprint on it. One can download the QR code application from Google play store or IOS and copy it from the card to read the message,” said Saroj Kumari.

Now the team is initiating to involve public participation in the campaign and train people to reach till the end. “We are identifying the people and preparing a team of trainers from different organisations also includes NGO’s. To start with we train 800 Anganwadi workers under VMC for the campaign to reach each one in the society. We are also targeting other districts like Narmada where we prepare a team of trainers. We did programmes in Surat and now seeking more public participation in our campaign. As the summer vacations are approaching we are now in process to train students in the campaign and start with the Psychology department of MSU Baroda,” said Saroj Kumari.

Till date her team covered more than 50,000 children, 46,000 parents, 300 teachers and 80 schools in Vadodara city. Saroj Kumari said this is just a start and need to reach each and everyone. They are receiving positive response from the people as they approach them in such situations and that gives them a sense of satisfaction. The recognition inspires her to work harder towards her campaign for a better society.

Saroj Kumari also has the distinction for working for the betterment of sex workers in Botad district where she helped them earn a livelihood by work like tailoring.