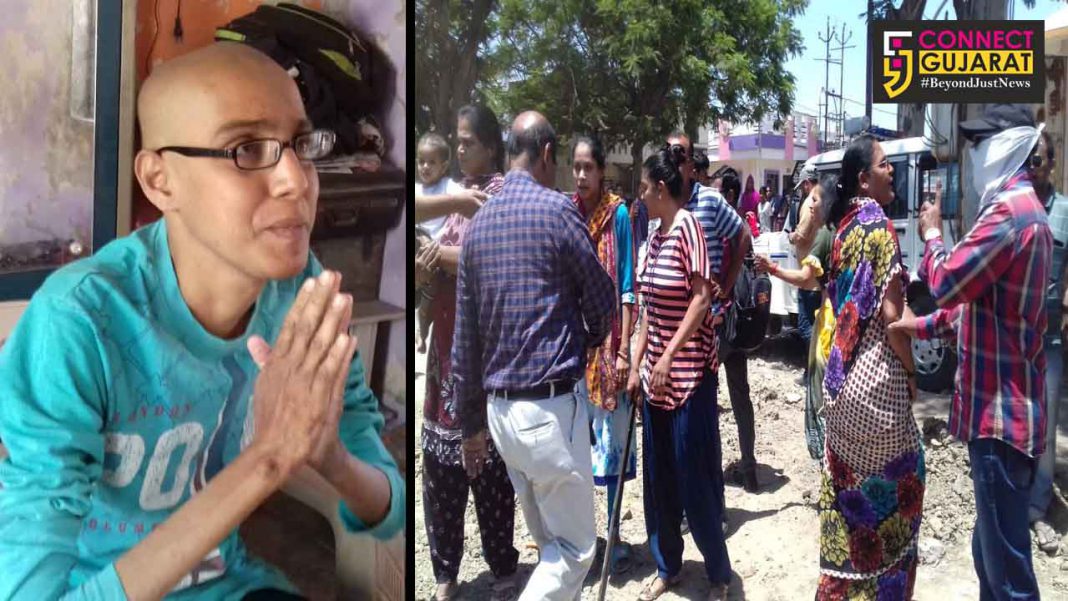 Vadodara crime branch team on Saturday reconstruct the incident of double murder in Sayajipark society couple of days ago. The locals rushed to beat the accused as soon as the police team reached the crime scene. Police later intervene and silence the matter to go ahead in their investigation.

Jilted lover Priyakant Solanki killed Jayshree More and her married daughter Payal Palkar in a cold blooded murder and was on the run since then. The crime branch team along with
PCB and Bapod police D staff in a joint operation caught him in 36 hours after commiting the crime. He killed the mother daughter on the terrace of their house as a fallout of love. He wants to marry the girl but she denied and hence he hatched the plan to kill her.

On Saturday the crime branch team reached the crime scene and reconstruct the whole incident along with the accused. However as soon as they reached the spot the locals with sticks and sandals rushed to beat the accused. Meanwhile DCP crime Jaydeep Jadeja managed to calm the situation and go ahead with the investigation.

The police reconstruct the crime scene with the accused by taking the same route and the way he attacked the mother daughter sleeping on the terrace of their house. The accused told the police about killed the mother first as she was awake and attacked him with a stick. He then killed Payal sleeping nearby.

He further told the police that he wants to marry her but she married to someone else. Since then he decides to kill her and hatched the plan. He climbed the terrace only to kill her but also hit the fatal blows to her mother in a fit of rage. About the one and half year old son the accused said to have no idea about him sleeping there. He has no intention to hit him.

Chirayu More is still in shock after lost his mother and sister as he was downstairs at the time of incident. Fighting with diabetes he heard the cries of both but before he could do anything the accused fled from the spot. He also felt helpless due to his disease which forced him almost bedridden. He survives by the injections and medicines from his father’s pension.

He demand rigorous punishment for the accused with a heavy heart. Bapod police is further investigating in the case.