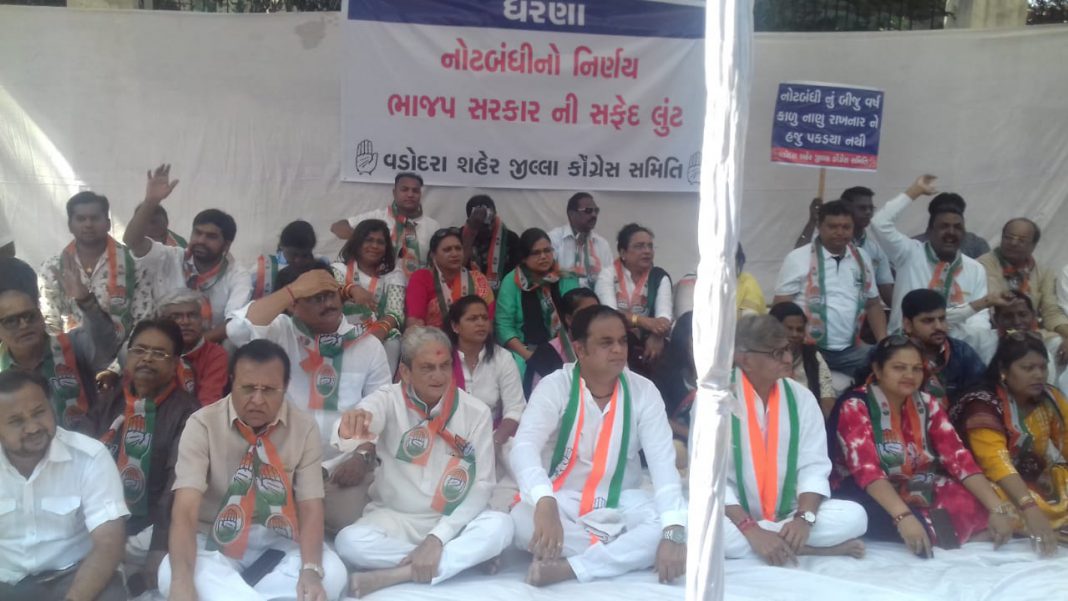 Put allegations on the present government for failed in the decision.

Alleging the present government for the failed decision of demonetisation the Vadodara city and district Congress sit on protest near collector office on Tuesday. They shouted slogans against the government and alleging their failure in bring back the black money through the decision. They also put allegations on the Prime Minister for taking the country on the way of ruining it by making false promises about economic growth, employment and finish terrorism with the demonetisation.

Senior leaders and members including women Congress also joined the protest and put allegations on the present government for failing in implementing the decision of demonetisation. City Congress President Prashant Patel said the decision of demonetisation ruined and finished the economy of the country. After the implementation the unemployment level is up and there are no signs of black money being brought back to the country. He further said that instead the black money increased inside here. Terrorism also increased after that and the Mann Ki Baat segment by the Prime Minister proves to be just taking the people towards wrong way.

The traffic also was affected due to the protest by the Congress party joined by senior leaders like District Congress President Narendra Patel (Mukhi), Leader of opposition in VMSS Chandrakant Shrivastav, Padra MLA Jaspal Singh, Satyajit Gaekwad, Bhikhabhai Rabbari and many others.

Police was also there as standby to stop any untoward incident during the protest by the Congress.