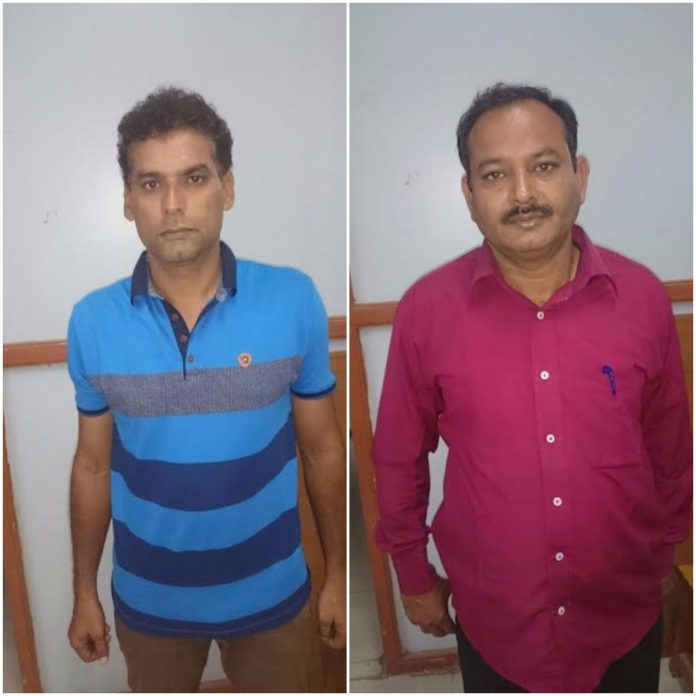 Vadodara City Anti Corruption Bureau (ACB) caught red handed an ASI Shiv Shankar and Police Constable Dipak Andani from MP police while accepting 8 lakhs rupees from the complainant in a city hotel. The duo was caught red handed by the ACB sleuths at around 7 pm in the evening.

The motive of the crime was for not registering crime of illegal possession of electric cables against the complainant. The complainant called the ACB and after the trap the ACB caught both the accused from Pandurana police station, Chhindwada MP in the evening at a city hotel. The police used Pre- audio recording and Audio-video recorder during the trap.

According to P.R. Gehlot Assistant Director ACB Vadodara there was a complaint registered of cable theft at Pandurana police station and police caught the accused. While investigating the accused reveled that he sold the cables to a scap dealer Bharat Tambe in Makarpura area of Vadodara city.

After the accused relvelation the police team of Pandurana headed by the PI came here on 10th October for investigation and raided the scrap godown of dealer but not found anything. After the raid the PI and two jawans returned back but the two ASI and Police Constable stayed here at the Sudarshan hotel. They called the scap dealer to stuck the deal and demanded 18lakhs but the deal was settled finally at 8 lakhs.

The scap dealer Bharat Tambe don’t want to give money and hence registered a complaint at the ACB. After the complaint the ACB laid the trap and at around 7pm caught both the policemen while accepting the bribe money from the complainant.

ACB also took the 9mm service revolver from the ASI and further investigating after arresting the duo. The complainant Bharatbhai Tambe was earlier involved in a matter where he helped the Ahmedabad police to caught J.J. Savaiya LCB PI while taking bribe five years ago.