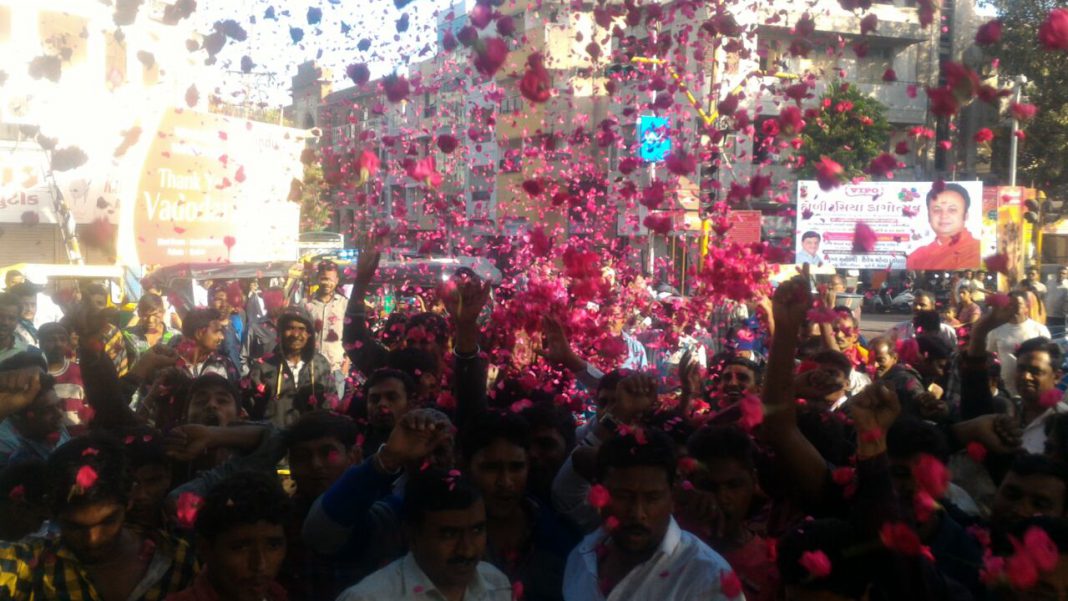 On Wednesday morning the people of Baroda passing from Khanderao market area were surprised to see rose petals spread on the road. Many feel that it’s some kind of religious procession or ceremony as the whole area was filled with the scent of roses. However later it was found that the flower sellers protesting against the corporation and threw the flowers on road.

It was a unique protest by the flowers sellers who comes daily at Khanderao market for selling the flowers. However on Wednesday they threw rose petals and flowers on the road to protest against the corporation decision.

According to the information 20 to 25 farmers from Karjan Taluka in Vadodara district is doing rose farming near the Narmada river. The environment there is suitable for the rose flowers and hence the rose production is higher there.


The farmers pluck the flowers in the night and comes to Khanderao market early in the morning and sold it to the wholesaler and small, big flower sellers on wholesale rate. The farmers daily sold 500kgs of rose in the market for just two hours.

Sanjay Maachi and Kamlesh Patel the rose farmers said that on Tuesday a corporation officer came to them and told them not to sit there and sell roses. They said the officer also threaten them to throw their flowers on the road if they enter Khanderao market.

Farmers further said that after the threatening they still came to the market on Wednesday morning and threw the roses by himself before the corporation officer intervene. They protest against the corporation and request to solve the issue or they will go for further agitation.

The farmers further said that the state government is already make arrangements for them to sell their products in the APMC to get good rate. So how the corporation ban them to sell flowers in Khanderao market.