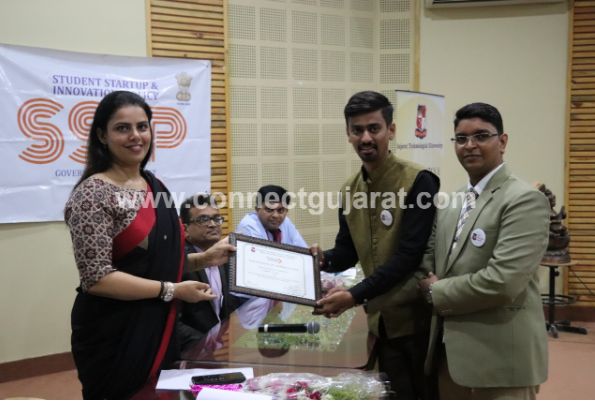 Once installed wearing seatbelts will become compulsory for drivers

The Ahmedabad school van incident in Gujarat is an eye opener for everyone specially to the careless drivers not hesitating to break the traffic rules. This recent example makes everyone search for ways to ensure safety of the passengers as well as for the people moving on the roads.

Everyday more and more vehicles add up on the city roads making it tough for people to move smoothly. The ratio of safety has been consistently decreasing resulting in more than 1.5 lac deaths every year due to road accidents which is quite a big number for any country. In a survey maximum number of deaths are due to "not wearing seat belts" by the people while driving on roads. As far as school vans are concerned the number of students are more than the permitted limits and that leads to Ahmedabad like incidents.

Considering all these facts, an engineering graduate from Vadodara city Ravi Sharma has designed such an electronic device which can be installed in any car starting from the lowest to the most luxurious.

After installation of this device in school vans wearing of seatbelt will become compulsory. He along with another engineer passout Bhushan Jadhav is working on to give final shape to the device.

"It's the Advance Seat Belt System where sensors will be fitted to the seat belt connected with the main system of the vehicle through very thin wires. The sensors will remind the driver to wear the belt or else the vehicle will not start in any condition. In personal cars the driver cannot drive par 25 to 30 km speed limit without wearing the belt and after 15 minutes the speed will decrease automatically and parking blinkers will start giving the indication to traffic cops," said Sharma.

There are two versions of this device, First one is ASBS 1.0 specifically designed for personal cars and the ASBS 2.0 for school vans. Both are mobile sized retro fit device available at a very pocket friendly cost capable of controlling the number of deaths due to accidents. To prepare this system Ravi Sharma has received grant by GTU Innovation and Start-up Center – Vadodara under SSIP Policy. He also received a grant for patent of this system and start a start-up venture on it.

ASBS 2.0: This device is fitted with such sensors that if the user is not wearing the seatbelt then the system will not allow the car to start and will turn on the blinkers and alarm of the car so that it becomes compulsory for the user to wear the seatbelt. This system is specifically designed for the school vans.

"The school van system is very timely in view of the Ahmedabad incident. With these basic features this system consists of many advance features like if the van driver is carrying more than 8 students in the van then the system will trigger an alarm and send location with details to a dedicated server. Along with this if the user tries to side step the system or tries to manipulate it then there is a facility of locking the system is also available which can be unlocked by any authorised personnel only," said Sharma.

They are now in the process to patent the idea and certification from Automobile Research Association of India. They want to take this system pan India and search for business partners.