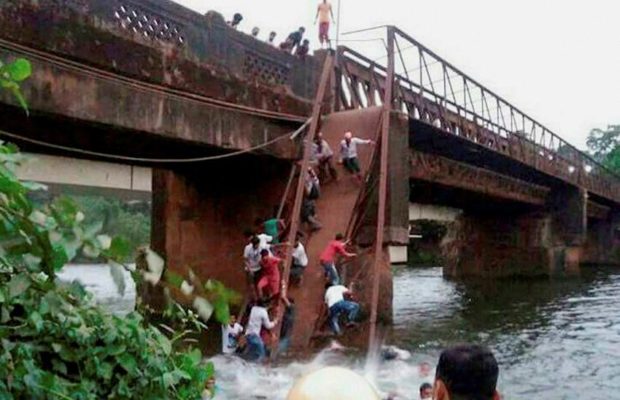 The exact number of persons missing was still not known five hours after the accident, even as one body has been fished out of the river. “Around 30-35 were rescued according to Fire department officials. How many are submerged we do not know. Some say it is 40-50 (persons) who were on the bridge, some say it around 30… But these are unconfirmed sources. Roughly it could be 40 odd,” Parrikar told reporters late on Thursday.

Parrikar also said that it was “tough to speculate” how many people were present on the bridge when the accident occurred.

“A full scale rescue operation is on. The Collector and the PWD minister is onsite,” the Chief Minister added.

The tragedy occurred after a crowd had assembled on the several decade-old bridge to watch an unidentified person attempt a suicide late on Thursday.

As per the sources Indian Navy and Coast Guard divers had been urged to help with the rescue efforts and that one body had been recovered so far. “Spoke to Goa CM Manohar Parrikar regarding the bridge collapse on Sanvordem river. Search and rescue operations have been identified,” Union Home minister Rajnath Singh said in a tweet.