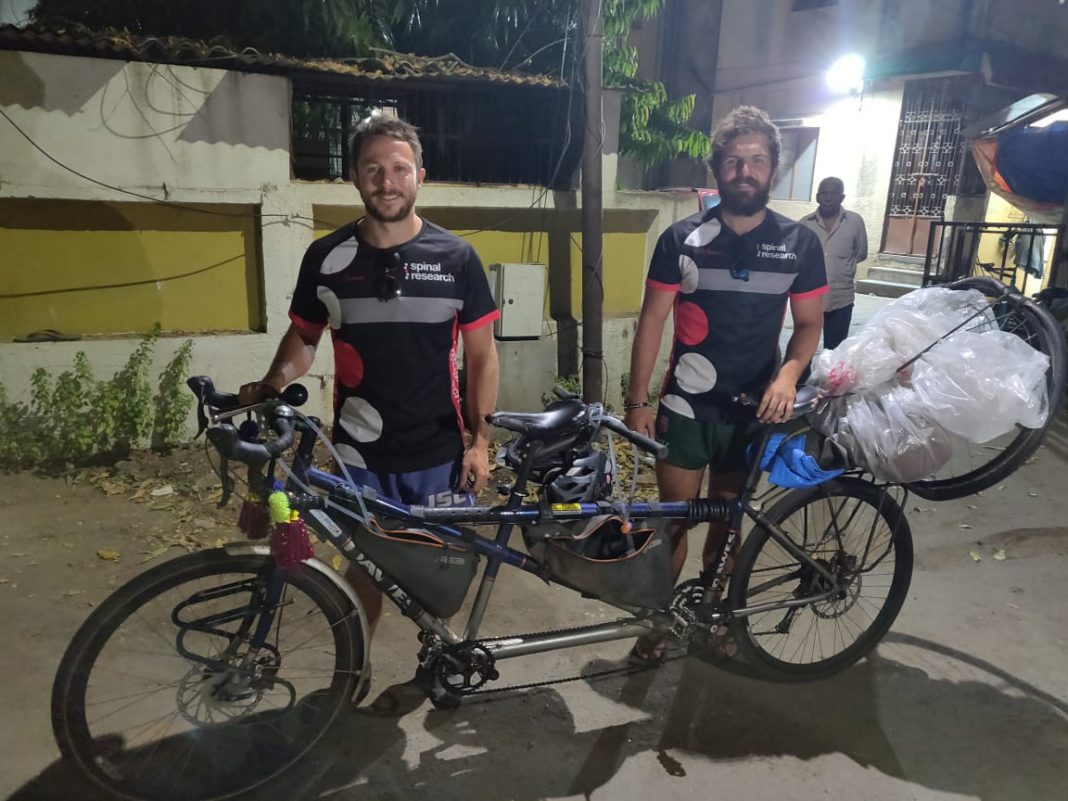 Two doctors from Australia is on a cycling mission to raise funds for the research on Spinal chord and brain related diseases. They are also try to attempt and break the Guinness world record of Fastest circumnavigation of the globe by Tandem bicycle. The two is now moving in India and feel the culture, tradition and warmth of the people here.

Llyod Edward Collier and Louis Paul Snellgrove are two Australian doctors set out on a mission to raise funds for Spinal research and Brain foundation. Lloyd and Louis aged 28 and 30 respectively are originally from the United Kingdom and are medical practitioners as emergency doctors at the Townsville Hospital of Australia.

The two till date covers 10,000 kms passing through countries like Australia, China, Mangolia and now travelling through various states of India. The duo is also trying to attempt and break the Guinness world record for the fastest circumnavigation of the globe by Tandem bicycle. Previous record is 29,000kms in 290 days and the doctor duo try to complete it in 280 days.

Both of them the cycling through 16 countries of four continents and experience the seasons and cultural diversities. They aim to travel the minimum distance of 18000 miles by bicycle and will be travelling through two antipodal points chosen as Madrid and Wellington. Starting from Adelaide in Australia they are covering countries like China, Mongolia, Russia, Georgia, Turkey, Morocco, Montenegro, Bosnia, Croatia, Azerbaijan, France, Japan, USA, New Zealand, Slovenia and Italy.

They are now moving in India on their Tandem bicycle and feel the cultural diversity and people in the country. They spend their nights inside the tents and while moving in the daytime their journey is mix of hard challenges and fun encounters with the locals.

Currently, the duo was in Vadodara as part of the India tour and visited the popular palace, garden and the auditorium. Sharing their experience about the country they said India is a vivacious country with inquisitive people at every nooks and corner of the city. Everything is intense here the food, weather and people. They are overwhelmed by the crowd as they are quizzing them and that creates a sense of curiosity in them.

The duo are in complete awe of the food it offers. The smell of curry and its different flavours were something totally new to them which they had tried at places of Kerala and Mumbai. Being English speaking both face the language barrier here to communicate with the people and install language translating applications in their smart phones for Hindi dialects.

About their experience riding on Indian roads they first hesitate but later share the risk factors people involved in here while riding. They are surprised to see people drive without helmets, potholes, unruly carpeting and wrong side driving. When they were travelling through Kerala, one of the drivers tried to click a selfie with them while driving his vehicle lost his control and eventually hit them. Fortunately, they had a narrow escape from the accident. They advised the citizens on the importance of road safety by sharing an anecdote.

The cyclists are on the tour with lots of hope for raising charity from around the world. They are targeting to raise 50,000 Australian dollars atleast for the research and moving through countries all across the globe.