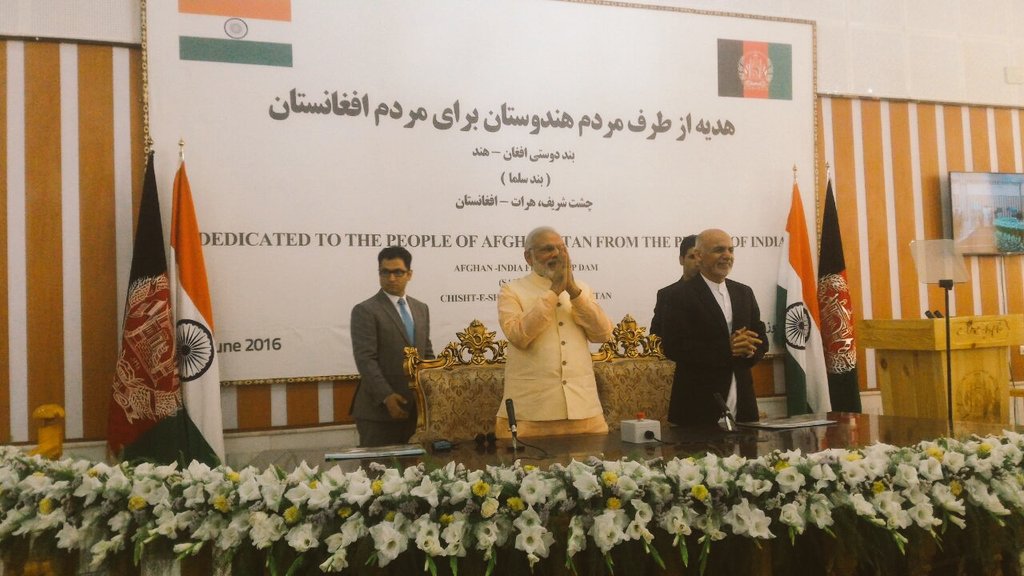 On the arrival of Indian PM Narendra Modi to Afghanistan he was welcomed by the small children of Afghanistan at Governor's Office in Afghanistan.

The historic occasion commenced at Gazi Amanullah Khan hall ,President of Afghanistan welcomed Narendra Modi by saying "Welcome to your second home Afghanistan" and further added in his speech that " Today with your help a long standing dream of Afghanistan has been realized after 30 years" , added to this he told that today they came together to make eternal India Afghan ties and friendship.

The Dam will chart a new course of cooperation and Prosperity ,people of Afghanistan identify India with roads, dams & over 200 small development projects. Contrary to those who spread chaos and destruction, India and Afghanistan have taken the joint decision to build and grow.

Beginning of his speech PM Narendra Modi said" This is yet another giant step in Afghanistan’s march to progress, not just launching a project,we are reviving a region,renewing life,restoring hope & redefining Afghanistan’s future, today we come together to honour and celebrate Afghan determination to build a future of prosperity Modi added to his speech.

This dam has not been built by bricks & mortar,but by faith of our friendship and valour of Afghans & Indians ,we want to see your democracy strike deep roots your people unite; your economy prosper;your art &culture thrive;your cricketers play tests & IPL.

At the end of the speech, PM Narendra Modi wishes the people of Afghanistan and all Muslims across the world for the Holy Month of Ramzan

A true brotherhood was honoured when ,PM Narendra Modi awarded the Amir Amanullah Khan Award and that is Afghanistan's highest civilian honour.

Over 1,500 Indian and Afghan engineers were involved in construction of the dam for several years in difficult conditions.

Afghanistan is Modi’s first stop as part of his five-nation tour which will also take him to Qatar, Switzerland, the US and Mexico.