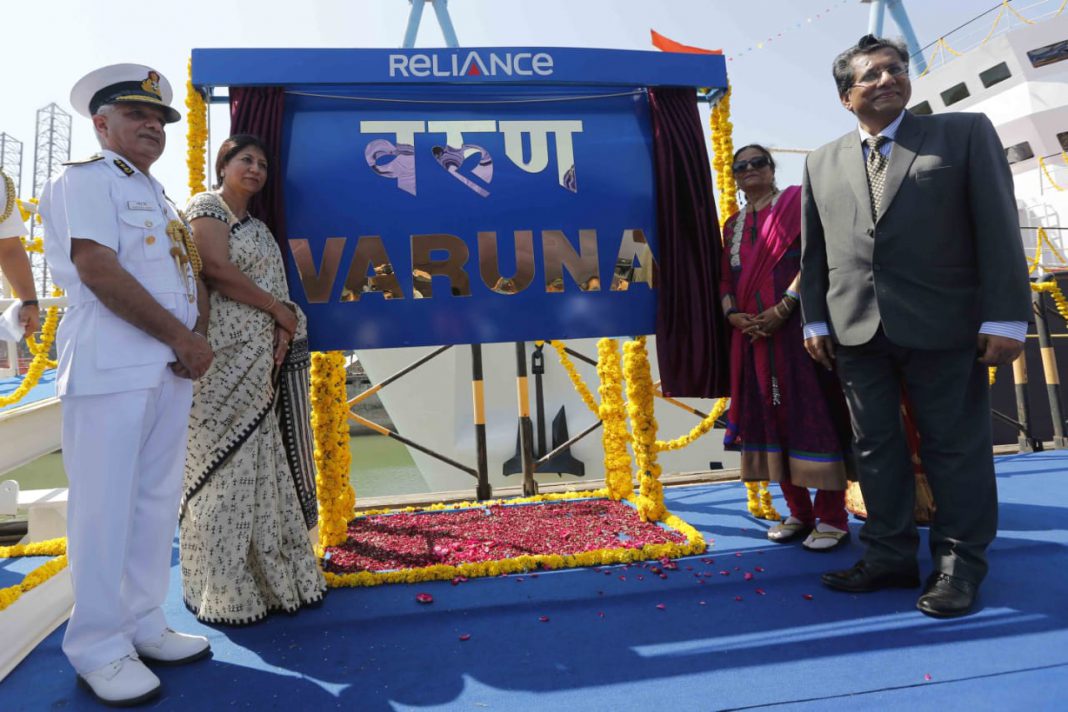 Strengthening and securing the coastal borders and concurrently training the young Coast Guard officers in acquainting themselves with developing maritime challenges.

In a glitterati moment, Indian Coast Guard Training Ship was launched today by Urmila Singh, wife of Director General Rajendra Singh, PTM,TM, DGICG at Reliance Naval and Engineering Ltd ( RNEL ) shipyard Pipavav (Gujarat). The vessel, rechristened as ICGS Varuna after the sea deity, is the second ship with same name, which was handed over to Sri Lankan Coast Guard in Aug 17.

The primary role of the vessel is to impart basic sea training to the under trainee officers of Indian Coast Guard along with their naval counterparts. They will be entrusted with seaborne evolutions and undertake overseas exposure to littoral nations for concurrently acquiring sea legs for their future appointments.

This 105 Meter long vessel shall house a compliment of 242 personnel including ship’s crew, training staff and trainees. This twin engine and twin CPP propelled vessel has a displacement of more than 3000 tonnes and is capable of achieving a max speed of 20 knots, so as to extend its reach upto 5000 Nautical miles at cruising speed. The ship also has a 30 mm gun as its main armament.

The Vessel will also be tasked with policing maritime zones of India, detect & prosecute hostile crafts and undertake search & rescue operations. The vessel is capable of operating a twin engine helicopter for long range operations while undertaking maritime reconnaissance. The other key feature is an additional Training Bridge with modern navigational training facilities, for all round viewing and has an additional conning position for imparting concurrent training, while carrying out actual navigation by the bridge team.

This training ship has been ergonomically designed with three class rooms and one auditorium stage room and is fitted with best of IT infrastructure, CCTV and library besides being equipped with highly sophisticated navigation and communication equipment, thereby making it a prudent and equally sophisticated marine training platform.

This new acquisition is a right amalgamation of latest technology coupled with the most apt architectural design and best suited sea worthiness. The indigenous design clubbed with state of the art infrastructure available at the RNEL shipyard, makes this a true ‘Make in India’ ship building project.

The ship on induction shall form part of the joint IN-CG training curriculum under the overall administrative control of Coast Guard Commander (Western Seaboard). Superintendent CGRPT, under whose supervision this vessel is being built, mentioned that the approach has been both modern  as well as conventional in planning state of the art facilities onboard, for all round development of the under trainee Coast Guard officers.

The Director General Indian Coast Guard in his address on the occasion stated that, this maiden project of Indian Coast Guard is in line with the make in India policy of the Hon’ble Prime Minister. This induction promotes the nation’s vision of strengthening and securing the coastal borders and concurrently training the young Coast Guard officers in acquainting themselves with developing maritime challenges.

The Director General also complimented the Reliance Naval and Engineering Limited, their work force and the newly established Coast Guard Refit and Production Team based at Pipavav, for their perseverant efforts in arriving at this important milestone.