The COVID-19 pandemic has been the most defining global health crisis of our time and the greatest...
Read more
0

A video clip of students of a college in Karnataka writing exams on Wednesday with cartons over their head has gone viral on social media drawing criticism and prompting the education minister to tweet that the incident will be ‘dealt with aptly’.

About 50 students of Bhagat Pre-University College in Haveri, 335 km from Bengaluru in the state’s northwest region, were forced to wear cartons to prevent them from copying in exams, an official said. A hole was cut out near their eyes to allow them to read and write their papers. 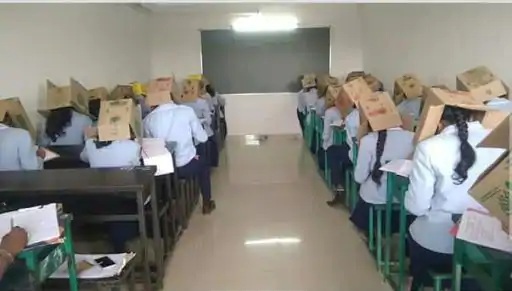 Reacting to the incident, state Education Minister S. Suresh Kumar said that such an attempt was not acceptable. “Nobody has any right to treat anybody more so students like animals. This perversion will be dealt with aptly,” tweeted Kumar.

“A notice has been issued to Bhagat Pre-University College seeking explanation for forcing its students wear cardboard boxes (cartons) while writing exams to prevent them from copying,” a Haveri district Deputy Director of Public Instruction (DDPI) official told.

The students of the co-education private college were writing papers in economics and chemistry subjects as part of the mid-term exams, conducted in their classroom. “Whatever be the purpose, student cannot be made to wear cartons for writing exams. There is no rule or advice from us,” said the official.

Defending the action, college head M.B. Satish told the media that a college in Bihar had used a similar method to check rampant copying during exams and was widely appreciated on the social media. “We tried to see how it works as a trial and told the students in advance that boxes would be given to each of them to wear before writing the exam,” he added.

India today created history by defeating Australia by three wickets in the fourth and final Test at...
Read more
Gujarat

0
Total 103 discharged from hospital taking the total to 21488 The number of positive cases in Vadodara reached 22746...
Read more
Gujarat

0
Through Nayan Prayas Project we are going to spread awareness in girls about the personal hygiene and also to remove taboos prevailed...
Read more

0
India today created history by defeating Australia by three wickets in the fourth and final Test at The Gabba in Brisbane and...
Read more

0
After Tandav, an FIR has now been registered against producers of Amazon Prime’s show Mirzapur for hurting religious sentiments and tarnishing the...
Read more

0
The national COVID-19 recovery rate has improved to 96.59 per cent with over 1 crore two lakh 11 thousand cumulative recoveries so...
Read more

0
The institution is expected to be created by merging some existing financial institutions to meet the long-term financing needs of new, stalled,...
Read more
- Advertisement -