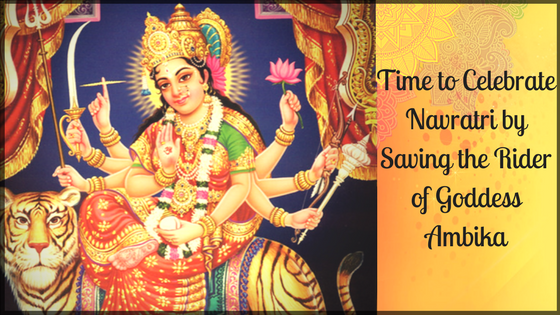 Tigers – the Endangered species, have vanished out of Gujarat totally and we have watched them quietly dying away from the land where we celebrate and worship Goddess Ambe (Ambika) – who rides on a Tiger. The festival of Navratri is here and whole of the Gujarat will be decorated with idols of Goddess along with tigers. Is it not a sad truth that the land where we worship tigers is not fortunate enough to have real tigers in their forests? As per “Tiger Census conducted in Gujarat in 1979”, there were 7 tigers, 6 of them were in dang district. The then Special Chief Conservator of Forests, Wildlife, Gujarat, MA Rashid, had warned that tigers in Gujarat were struggling for survival. Today, more than three decades later, they had vanished from Gujarat’s biodiversity.

There has been a debate on the existence of tiger in Gujarat as the issue was raised after the wildlife count in 2001. In January 2017, just few months ago, Rajya Sabha MP Parimal Nathwani, who is a wildlife enthusiast, urged for a scientific study to confirm the presence of tigers in Gujarat. Later, based on reports available from tiger experts, the MP stated, “Two constables of Maharashtra police posted at a checkpost on Gujarat-Maharashtra border, spotted tiger entering in Maharashtra forest area from Gujarat’s Ahwa forest in Dangs district and returning. The location is Zakrai Bari area, in the vicinity of Shabri Dham Forest in Dangs that falls under Range Subhir. Just few minutes ago MP parimal Nathwani Tweeted this..

Senior Journalist from Gujarat, Mayur Jani, who is also a wildlife enthusiast, says that “the forests of Dang, Devgadh bariya and Rajpipla hold the perfect climatic & environmental conditions for tigers to survive. Hence, many local people have noticed the pugmarks of tigers in 1998-99 in devgadh bariya”. While elaborating the facts, Jani shared that in the span of 1998-99 several incidents proving the existence of tiger in devgadh bariya has been recorded in the books of state forest department. “As a journalist I have covered interviews of many forest officers confirming pugmarks of tiger in Gujarat” added Mayur Jani. Despite these debates, today there is no sure shot statement or visuals captured of tiger in Gujarat’s biodiversity. But, in few fortunate states of India there is still a hope to save these endangered species and rare people are in working with true determination towards the cause of saving the extinction of these animals from jungles of India.

Hans Dalal, Sound Engineer by profession, a wildlife enthusiast and founding trustee of PROWL (Preservation Of Wild Landscape) is working towards a mission of saving tigers and spreading awareness about them through PROWL in innovative ways.

Hans was born with cerebral palsy, a neurological disorder caused due to brain malformation in the early stages of birth. He was delivered premature, as things got complicated due to delay in blood transfusion when he contracted jaundice, and that left him with a speech and movement impairment. He could not walk on his own till he was 6 years old. Today, he is a celebrated tiger conservationist, wildlife photographer, documentary filmmaker, and musician.

Things become bigger when people with similar passion meet. Avantika Chandra, also a founding trustee of PROWL and wife of Hans, happens to be as passionate about wildlife and nature as Hans. Their passion for saving nature and wildlife inspired them to start PROWL, an NGO that is committed to the preservation of wild landscapes. It is important to empower and enable local communities who live inside and around forested areas because they are the forest watchers.

Recently the NGO has initiated a campaign to empower people of India to take steps towards saving nature. Bollywood Actor, Randeep Hooda too is associated with them, where he talks about how we the people can help them in this mission of creating healthy forest ecosystems. Interestingly, even Randeep shares the common interest and passion with Hans and Avantika for nature conservation and this makes him join the PROWL campaign.

Thank you Randeep Hooda​ for caring about the #environment and…

Thank you Randeep Hooda for caring about the #environment and doing your bit. Your support towards PROWL is invaluable. – Team #PROWL

Did you know that Saving Tiger can provide fresh water? The most valuable substance in future is going to be ‘fresh water’ and it’s time to get involved in doing whatever we can for preserving nature. Social media voices are already flowing from various regions of India. Check what people have to say about it.

More power to @HansDalal & @RandeepHooda for caring about the #environment. Your support towards #PROWL is invaluable. 🙏 pic.twitter.com/5fEDIfivfK

Most of us want to do something for #environment but don't know how..here's how #Tigers #PROWL @drharshvardhan @HansDalal @UNEP @WWF_tigers pic.twitter.com/qsfjJCdGx4

I have made my contribution. Friends plz watch this video & do your part to save the wildlife. #PROWL #SaveTigershttps://t.co/5DUEOnpaRg