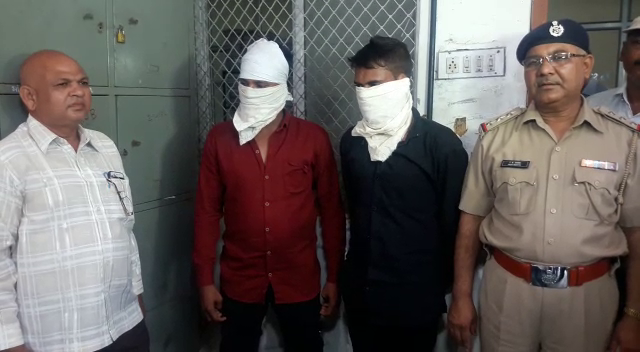 In a shocking incident a young couple in Vadodara was kidnapped and robbed inside a van. After that two of the accused molested the girl and fled from the spot. Police arrested the two in the matter instantly after the complaint and hunt is on to trace the third accused.

As per the details the couple got married just six months ago and lives in a rented house in the Manjalpur area. They both work in a company in Makarpura GIDC and also get training there in marketing.

On Monday late night the couple were going to receive the friend of the girl from near Vadsar Bridge. Meanwhile the friend called and tells them not to come as she got the lift and both return back to their home. As they reached near Makarpura GIDC vegetable market three youths in the age of 20 to 25 years rushed to them and inquired about them.

The youths asked them about their liquor boxes stolen for last three days and stopped them. As the couple said they are working here and trying to convince them they threaten them to rob them. Meanwhile one accused caught the husband and the other two robbed the jewellery from the girl. They also took the mobile and cash from the boy and tried to get rid of them.

Both tried to run from them but they were separated as the girl lost the grip of his husband hand and fell prey to the following three accused. They then took her to the open ground nearby and molested her before fled from the spot. Her husband reached the spot and later with the help of vehicle headlamps found his wife. They reached their home and first narrated the incident to their landlord and then gives a complaint in Manjalpur police station.

Meanwhile the police along with the couple and the landlord reached the spot of the incident where the police arrested two accused Jaydeep Patel and Satyam Pandey both residents of Manjalpur from there. The hunt is on to trace the third accused Ajay Patel declared wanted in the incident.

The victim and the accused was taken to the SSG hospital for medical examination by the police.