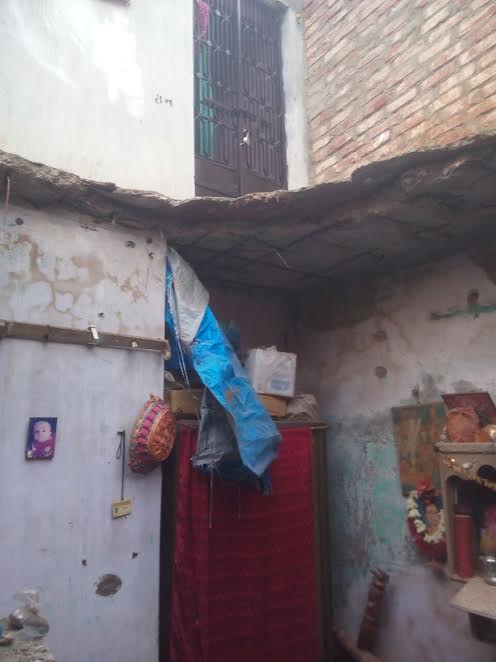 Three persons injured and three others had a close shave after the roof slab cave in on them. The slab from the dilapidated house no. 538 in Chacha Nehru Nagar came down on the family when they were sleeping inside.

All the injured were rushed to the SSG hospital for treatment. The girl of the family lives in Mumbai came to Vadodara to meet her parents and was frightened after the incident happened early in the morning. Chacha Nehru Nagar area has around 350 houses and many houses are there in dilapidated state. Rajesh Mistry working in Excellent Engineering Company in Makarpura GIDC is living in the one room kitchen house no. 538 with his wife and 18 year old son.

Rajesh Mistry went out for work around 6 am and his wife Geeta, son Dhruvin, married daughter Vinita, her husband Mitesh Gohil, her 9 year old daughter Tanvi came from Mumbai and her sister in law from Pune Pushpa Parmar were sleeping inside the room. Around 7 am the roof slap caving in suddenly on them and Dhruvin, Pushpa Parmar and nine years old Tanvi were stuck under it. The other three shouted for help as they miraculously escaped.

The locals rushed to the house and tried to save the three who stuck under the rubble. In the meantime the people called the Fire brigade and they rushed to the spot and rescued the three and send them to SSG in the 108 ambulance. Vinita who was frightened after the incident said that they were about to leave for Mumbai on Friday but stayed after her parents insist. The incident happened early in the morning and by the grace of God they all are saved.

The family also showed their anger on the staff of the SSG as they alleged that there is no facilities availito give primary treatment.