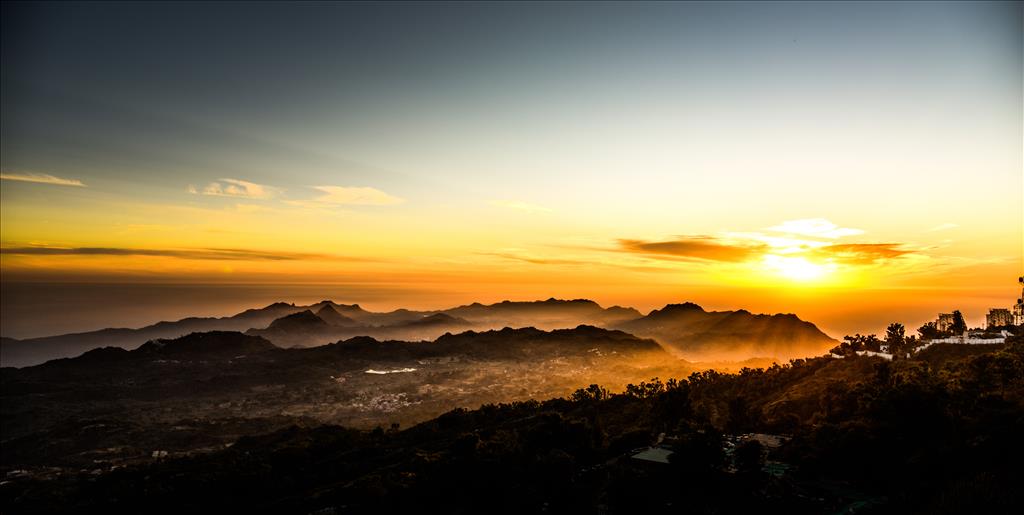 Mount Abu town, the only hill station in Rajasthan, is located at an elevation of 1,220 m (4,003 ft). It has been a popular retreat from the heat of Rajasthan and neighboring  Gujarat for centuries. The Mount Abu Wildlife Sanctuary was established in 1960 and covers 290 km² of the mountain.

The mountain is also home to several Hindu temples, including the Adhar Devi Temple (also known as Arbuda Devi Temple), carved out of solid rock; the Shri Raghunathji Temple; and a shrine and temple to Dattatreya built atop the Guru Shikhar peak and a number of Jain temples including Dilwara Temples, a complex of temples carved of white marble that was built between the 11th and 13th centuries AD. The oldest of these is the Vimal Vasahi temple, built in 1021 AD by Vimal Shah and dedicated to the first of the Jain Tirthankaras and they include the Achaleswar Mahadev Temple (1412) and the Kantinath Temple (1513). It is also the location of the headquarters of the Brahma Kumaris. The Achalgarh Fort, built in the 14th century by Rana Kumbha of Mewar is nearby and at its center is the popular visitor attraction of the Nakki Lake. There is the Toad Rock on a hill near the lake. Close to the fort, is the Achaleshwar Mahadev Temple, a popular Shiva temple.

The Durga temple, Ambika Mata Temple lies in a cleft of rock in Jagat, just outside Mount Abu town. Summer: Summer season prevails from mid-April to mid-June, when the average maximum temperature remains around 36 °C. Therefore, it will be better if you bring light cotton clothes. These clothes are fit for the summers of Mount Abu. Monsoon: Due to its relief and geographical conditions, it rains well in Mount Abu during the monsoons. During the rainy season even the temperature falls down. Normal summer clothing will do. It is wiser to carry an umbrella in order to avoid being caught at the wrong side of monsoon. Winter: Winters are cool in Mount Abu, with mercury hovering around 16 °C to 22 °C. Nights are really chilly, and the average night temperature is around 4 to 12 °C. Nevertheless, there have been instances when the temperature dipped to as low as −2 to −3 °C. Heavy winter clothing is preferable. You can include long coats and outsiders in your luggage. In daytime, light pullovers are sufficient.