Home > Events > This time storm of BJP in Himachal is going on: Modi
Events

This time storm of BJP in Himachal is going on: Modi 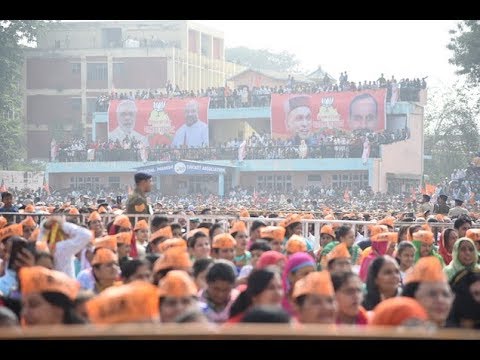 Prime Minister Narendra Modi on Sunday hit out at the previous Congress-led government for abusing subsidy of Rs 57,000 crore meant for the poor.

PM Modi while addressing a rally in Una, Himachal Pradesh said that from last 20 years he has come in every election to Himachal, but in 20 years he did not saw the election like this time.

"People used to loot the treasury in the name of subsidies. In the past, 57,000 crore used to get leaked due to rampant corruption in implementing subsidies, Now our policy has stopped the leak. The leaders in Congress cannot bear this, so they are attacking me."

Taking potshots at former Prime Minister Rajiv Gandhi's statement that Re 1 ends up as 15 paise when it reaches villages, Modi said: "Rajiv was such a doctor who diagnosed the problem of corruption but did not do anything about it.

"He has made sure that the whole of 100 paise now goes to the pockets of the poor."

Playing the development card by driving through promotion of tourism in the hill state, the Prime Minister said his government was focusing on laying road networks in the state.

"I have never seen such enthusiasm for the BJP that I am witnessing this time in Himachal Pradesh. It's a one-sided contest."

In the last 20 years, there has not been a single election where I have not been involved. But this is an unprecedented election. I know where the wind is blowing.

"A storm is raging here against the corrupt Congress."

He said that this time storm of BJP in Himachal is going on. PM targeting the Congress, said that people's anger has spread in the state against corruption, law and the protection of women.