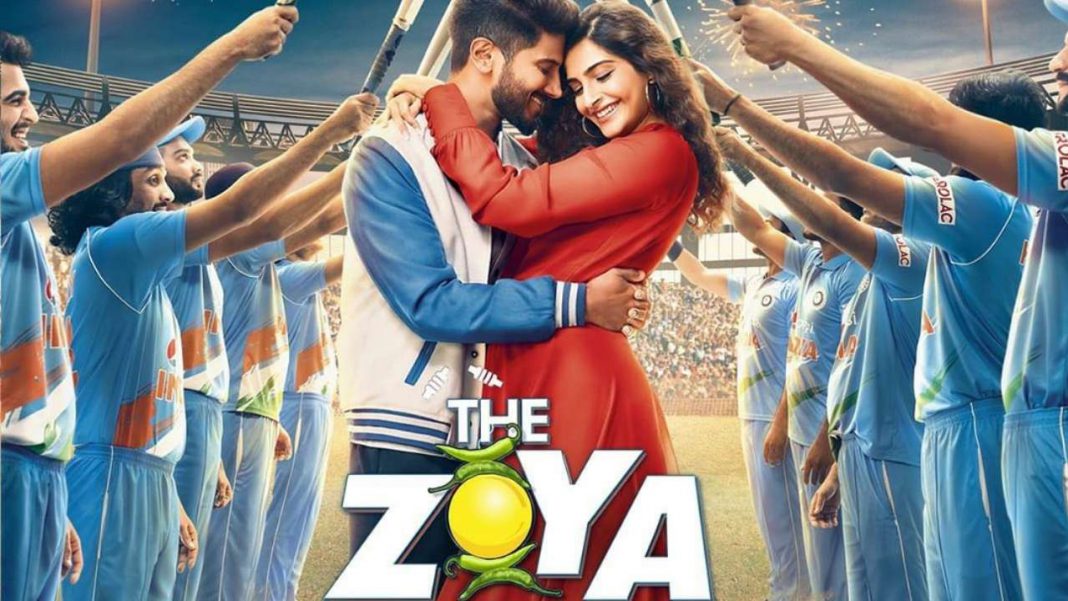 Based on Anuja Chauhan’s 2008 novel by the same name, The Zoya Factor tells the story of its eponymous character in a quirky adorable fashion. Zoya Solanki and Sonam Kapoor’s duo seems to  complement each other.

The movie opens with Shah Rukh Khan’s voice-over telling us about the baby who was born on the day when India won the 1983 World Cup. Her father (Sanjay Kapoor) declares her to be a gift of the Cricket Gods to the family. Zoya however grows up cursing her luck until she finally declares that “my personal life sucks and my professional life sucks.”

A junior copywriter in an advertising firm, a fortunate stroke of occurrence takes Zoya to the Indian cricket team’s breakfast table.

Soon everyone seems to be taken in by her “lucky charm story” except for the team captain Nikhil Khoda (Dulquer Salmaan). But how does one explain the fact that having breakfast with Zoya would almost always lead to heroic wins on the field and her absence means a crushing defeat!! However another question pops up- how long will the Zoya factor last? Turns out for us it’s only till the interval.

The Zoya Factor still isn’t a lost cause. The cricket sequences have been brilliantly crafted. From the commentary that is absolutely hilarious to the casting that is spot on.

Sikander Kher as Zoya’s brother, Angad Bedi as the disgruntled ex-captain and Manu Rishi as a cricket board official are particularly good. It also helps that both Sonam and Dulquer are effortlessly charming

Overall according to critics this film is said to be quite enjoyable and will make a satisfying smile on your face from the movie while leaving the theaters.