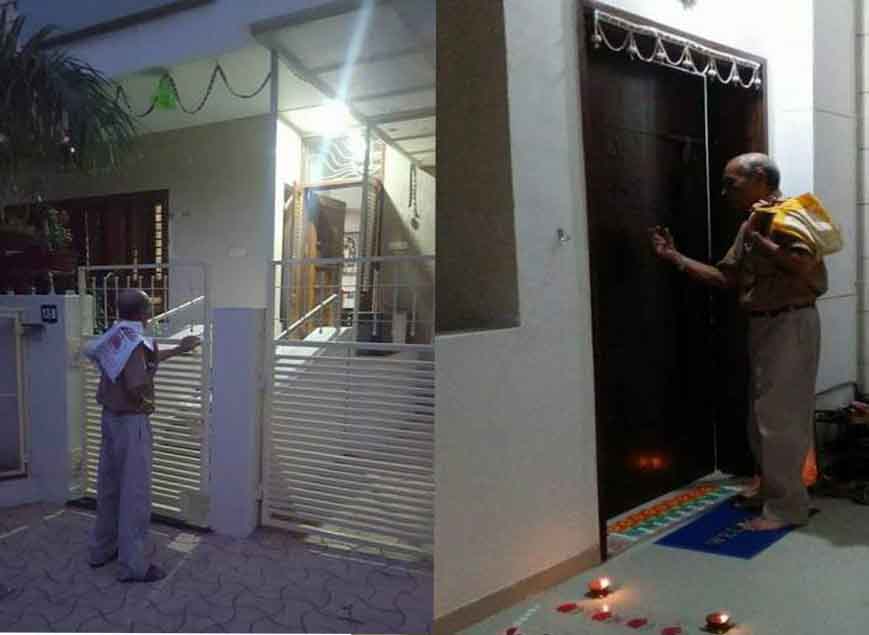 In changing times people almost forget their traditions which is the base of our culture. But persons like Dhiru Mistry a social activist  from Vadodara still believe in keeping alive the years old traditions and still follows it.

the day after Diwali is celebrated as new year in Gujarat and auspicious Sabras is distributed to people as decades old tradition followed at many places. Keeping alive the years old tradition and childhood memories Dhiru Mistry went to the localities in the city to distribute Sabras. The tradition is still following by handful of people across Gujarat.

He remember his childhood days when their group of friends went to the nearby societies to distribute Sabras. Sabras (Salt) is considered to be auspicious and they get money in return. This year also Dhiru Mistry went to the localities and collect money in return of Sabras.

“On 8th I went to Daxina Murti on Sun Pharma road early morning at 6 a.m. After parking my vehicle I shouted,  ” Sappar me Dahade Subras”. This is the phrase continuing since decades. I used to to sell salt (Subras) in Sayajiganj area of Vadodara before 68 years. Last year I thought of reviving my childhood and decided that I once again start this age old tradition. I told my society members and they appreciated. A paisa,  ana,  two anas,  four anas or a rupee I used to get before 68 years this time I only went to 8  flats of Purushottam Nagar and received Rs. 3251/- which I ditributed to Naya Marg,  PTRC, (Peoples training and research centre) Mahila Sanskrutik Sangathan,  Shishu Milap and Sadbhavna Forum,” said Mistry.

The initiative came as a good gesture for the people and they invite Dhiru Mistry to their societies next year to offer Sabras to them. One of them is Lion Narendra Patel phoned

“This time after parking my vehicle I shouted,  “Sappar me dahade sabras” and the door opened and came the voice “Please come we are waiting for you. Narendra Patel has Watesaped us about your arrival. I gave them two pieces of salt and an envelope of Rs. 500/- came to my ,,”Theli” (bag).  Same amount was received from Narendra Patel,  Kishor Raigandhi, Smt. Virendra Bhatt,  Prerak Panchal,  Upasani and few more,” said  Mistry.