The evolution of Gujarati Cinema in recent days 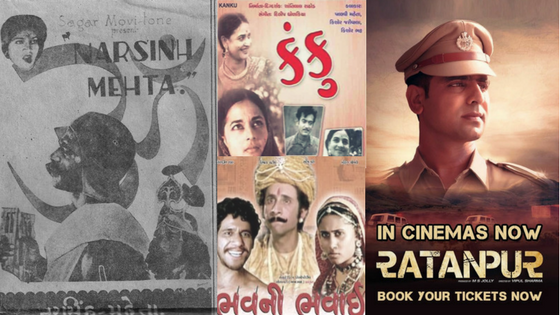 Certain regional cinemas posed a stiff competition to the otherwise dominated Bollywood industry. Gujarati cinema was one of them. The word Evolution is used in the title as Gujarati cinema seemed to underperform a lot between the early 2000's to mid 2000s'. There has been a lot of radical development in the quality of movies being produced in the Gujarati film industry. Let’s take a look at the brief timeline describing where it all started and where it has reached to what can be expected more.

Gujarati cinema, informally referred to as Dhollywood or Gollywood, is the Gujarati language film industry. It is one of the major regional and vernacular film industries of the cinema of India, having produced more than one thousand films since its inception. During the silent film era, many individuals in the industry were Gujaratis. The language-associated industry dates back to 1932, when the first Gujarati talkie, Narsinh Mehta, was released. Until the independence of India in 1947, only twelve Gujarati films were produced. There was a spurt in film production in the 1940s focused on saint, sati or dacoit stories as well as mythology and folktales. In 1950s–1960s, the trend continued with the addition of films on literary works. In the 1970s, the Government of Gujarat announced a tax exemption and subsidies which resulted in an increase in the number of films, but the quality declined.

After flourishing through the 1960s–1980s, the industry saw a decline through 2000 when the number of new films dropped below twenty. The Gujarat state government announced a tax exemption again in 2005 which lasted till 2017. The industry has been partially revived in the 2010s due to - first, rural demand, and later to an influx of new technology and urban subjects in films. The state government announced a policy of incentives in 2016.

What led to the underperformance?

The problems like lack of investment, no modern infrastructure to compete against the other industries. Not much of importance given to acting by the youth of Gujarat and the people's other options for entertainment led to the underperformance in the mid-period.

It is a known fact that Gujarat is gaining a lot of attention from all over the world owing to many factors. This attracts many to migrate to Gujarat. A state's prowess is reflected in its linguistic attitude. Gujarati film fraternity wants to revive its past glory. Taking inspiration and ideas from other language movies; to keep on par with the current trends; Gujarati Cinema is on a spree. An instance can be explained concerning the film Ratanpur that just released few days back (16 march 2018).

Ratanpur is a movie based on a murder mystery. It has a mix of young and experienced star cast ensemble. The film story demanded a forest set up but that wasn't available due to absence of advanced film studios in Gujarat. The forest is the background of the crime in the movie. All the scenes to be shot in a forest were shot in real forest locations. The simple technology cameras that capture well in real light were used. The Director of Ratanpur, Vipul Sharma, made sure that every single expression captured should match with how a person in real life would act or react to a given situation. Because gone are those days where we used to see one facial reaction thousand times with strong musical backgrounds. Rantanpur is one of the most unique and real life based film in the Gujarati film industry. There is no theatrical drama in this film and that’s the reason audience is loving to watch it in theatres for the amount of hard work that has gone into the making. “In the times of facebook live and real time connection, movies like Ratanpur directly bonds with its viewers. We wanted to connect in real time with our audience and this movie makes us closer to them” says Yogesh Pareek, Co-Producer, Prolife Entertainment & Productions Pvt. Ltd.

Cinema has become a more powerful medium these days. So, the uprising of Gujarati Cinema right at this time is indeed very commendable. This is also the best time for the young talents to come up. One can say that Gujarati Cinema has developed and evolved a lot in the recent years and would develop more in the years to come to make it one of the top filmmaking industries in the country.