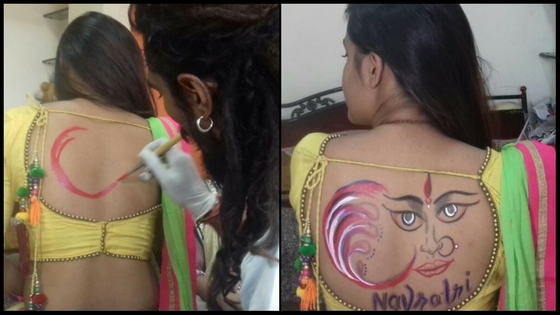 The nine day long dance festival which is world’s most longest festival in the world started from Thursday and like every year, girls of Gujarat are doing everything to create unique looks to stand out from the crowd. Apart from lavish Chaniya Cholis, there is a trend of temporary tattoos that is an evergreen craze among girls. Before and during Navratri they visit tattoo artists with their demands to draw their favourite tattoos on hands or back.

During this time of the year the tattoo artists are most busy as the garba revellers specially the girls approaches them to draw temporary tattoos which lasts for few days or till the festivals ends. A tattoo nowadays is not only a style statement but it gives the person a unique look among the crowd.

Temporary Tattoos a craze among girls during Navratri
1 of 3

During Navratri girls becomes busy in choosing their jewellery, dress and other things for the garba. But some of them are also crazy about tattoos and they visit the artists with their demands. This year also the craze is intact and the favourite among them are Maa Durga tattoos and related traditional designs like images of God & religious objects in the spirit of the festival.  .