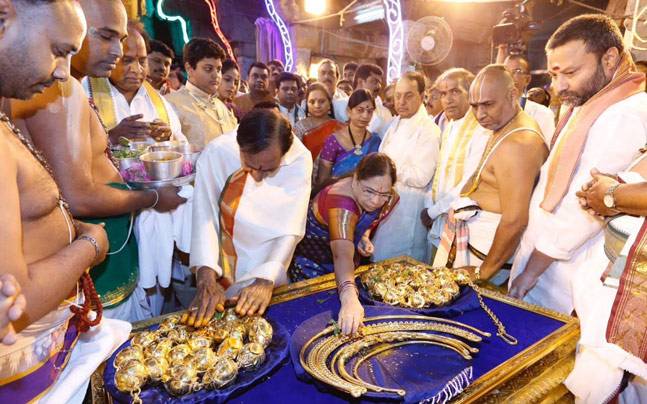 Telangana Chief Minister K. Chandrasekhar Rao on Wednesday offered gold ornaments worth Rs 5 crore to Lord Venkateswara, fulfilling a vow he had taken during the movement for a separate state.

More than two-and-a-half years after achieving his goal, Rao along with family members, ministers and top officials made the offering at Tirumala temple in this Andhra Pradesh town.

KCR had ‘darshan’ at the hill shrine and performed rituals. He arrived here in a special aircraft to hand over the 18.85 kg of ornaments to temple officials.

After praying, the Chief Minister told the media that he prayed for the prosperity of the people of both Telugu states. He hoped the two states have cordial relations. KCR also promised help to the temple authorities in their plans to build a Sri Venkateswara temple in Hyderabad.

He later left for Padmavathi temple to offer prayers and present a golden nose stud worth Rs 45,000 to the goddess.