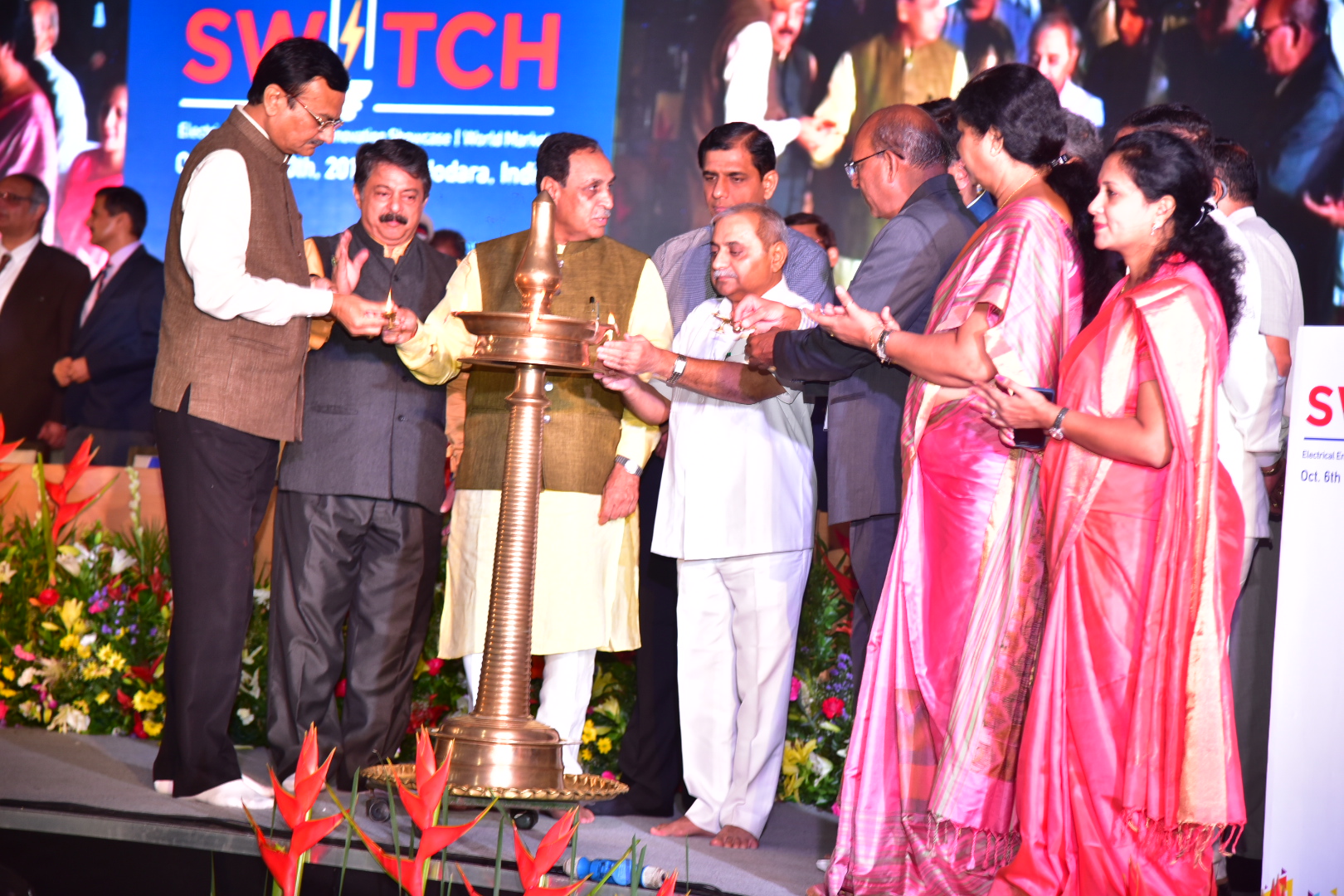 The International Energy Conference 'Switch' starts with a bang on Thursday in Vadodara with Gujarat CM Vijay Rupani praised the vision of Prime Minister Narendra Modi to make the state a leader in power sector.

He also praised the Vadodara city to take the initiative to organised such a massive power conference which will help the state to make it a favorite destination for investment and business hub in the world. The five conference Global switch expo was attended by around 29 state power ministers from 15 countries and around 3600 VVIP guests. At the inauguration of the expo Central Power Minister Piyush Goyal, Gujarat CM Vijay Rupani, Deputy CM Nitin Patel and many other dignitaries from all across the world were present at the massive expo spread across 8.60 lakh square foot land at Darjipura near NH8 in Vadodara. The Central power minister was all praise for Gujarat and said that the state is a model state for others in the power sector. And such a expo will take it to the international level. "I always like the way Gujarat implement and revolutionize the power and success stories to implement power. The State is leader in power and with schemes like Jyotigram and Ujala the state under the leadership of PM Narendra Modi is setting an example for other states to follow. The PM promised to give electricity to every home in India till 2022 is what we are following and we are sure that we achieve the target much before the deadline. I praise Gujarat for its new innovative technologies to reach out to every corner of the state to give power and now the model is implemented in other states. Such a global expo for renewable energy is very important as there is a need to promote clean and green energy to save for our future generations," said Goyal. He also said that they are committed to ensure the people and the farmers of India to provide affordable, sufficient power and they are working on that target. Before his speech Goyal welcome all the dignitaries in Gujarati language which took many as a surprise. Goyal also put focus about the International Solar Alliance where PM Narendra Modi speaks about sustainable lifestyle and climate justice and the world accept the idea. Gujarat CM Vijay Rupani also praised the expo and said that its an important milestone in history of Vadodara. "Vadodara contributes 23% of the total power in India and also the hub of transformers. As our PM Narendra Modi's vision is to take Gujarat on a global map and we are trying to make the state a investment destination for the companies all across the world.

We are No.1 in power and now we are also leader in Solar energy. Now we are trying to be taking the lead in Biogas also. We want to focus on renewable energy for the future and slowly and gradually we are attaining it.

There are several examples of using renewable energy in the state and i am happy to announce that soon Gandhinagar will be the first capital in India for having solar roof top at every house. We are working on the policy to install solar roof tops at every house in Gandhinagar," said Rupani. He also added that as we are reaching to everyone in the state in terms of power we hope that with the help of innovations and technology Gujarat will be the No.1 state in power in the world.

Deputy CM of Gujarat said that its a good opportunity for the businessmen, technocrats and investors. He said under the leadership of PM Narendra Modi the country is trying to supply power to each and every corner of India. "Under Jyotigram yojna we covered Gujarat but in India we are yet to reach every corner due to the past Congress government. Before them the programme started with the Urja song sung by school students of Vadodara city along with 50 Divyang students among them. State power minister Pradeepsinh Jadeja welcomed the guests and said Gujarat is pioneer in the renewable energy and the state has the robust transportation and distribution network to supply power. He also said that Vadodara is contributing 23% to the total power in the country and also the electrical hub and this type of global exhibition is a stepping stone for many.He also welcomed all the guests to be a part of the expo and also to enjoy the biggest cultural festival in the world 'Navratri' in the city. He said the famous lines of Gujarat Ambassador Amitabh Bachhan 'Kuch Din To Guzaro Gujarat Main' and welcomed the guests and dignitaries.

The expo will continue till 10th October and will be attended by many well known personalities of India like Pullela Gopichand, Deepa Malik, Chetan Bhagat, General V.P. Malik and many others.