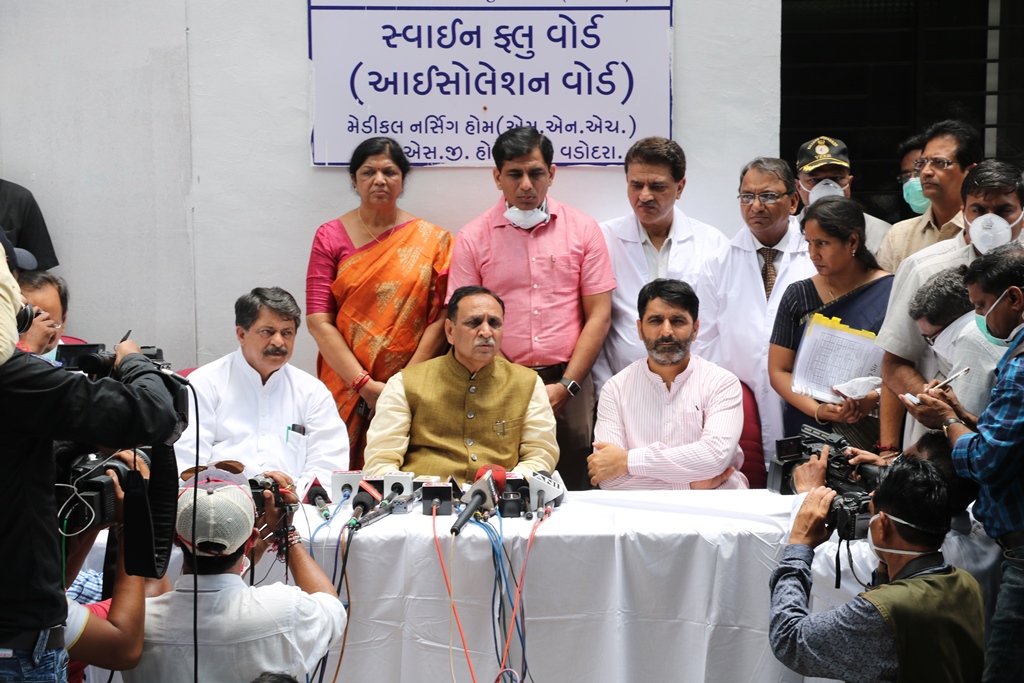 Gujarat CM Vijay Rupani on Thursday reached Vadodara SSG hospital as part of his marathon meetings and observes the facilities to fight Swine Flu in the four civil hospitals of the state. On his visit to the city he said the corporation areas are the most prone as 68% of the patients come from here. However he quickly said the reason being the dense population here in the city areas. He also said that the government is well equipped to fight the disease.

Starting from Surat CM Vijay Rupani reached Vadodara SSG hospital and checked the facilities in the Swine Flu Isolation ward. He met patients and asked them about the treatment receiving by them inside the ward. He also checked the ventilators, oxygen cylinders, medicines and satisfied by the arrangement there. He said the whole country is fighting with the Swine Flu scare and also the state of Gujarat who stands strong against the disease.

“The whole country is suffering from the Swine Flu scare and the state of Gujarat is also facing the heat in the month of July and August. There is a circle of Swine Flu which starts and then reach its peak and then comes down. So we hope that the circle will comes down in the coming days. Swine Flu scare is on the rise and we done video conferencing with every district collectors earlier. Yesterday on Wednesday we discuss the matter in the cabinet and after the presentations we formed the high level committee head by the CM along with health minister Shankar Chaudhary, health secretary and other officials. The team decide to visit the four big cities of Gujarat to check the Swine Flu wards and the facilities given to the patients,” said Rupani.

He said till date 2095 positive cases came to light in the state and about 68% of them are from Corporation areas. The reason for maximum cases from the cities is due to dense population and the disease is infectious and spread from people to people. Government is ready to fight against the Swine Flu scare and they spread the message of Any Flu to Tamiflu. He said they visit the Swine flu wards in the hospitals, met the patients, and checked the ventilators, oxygen and medicines and found everything in order.

The government opened 9 laboratories where free testing is there for the samples. The Tamiflu medicine is also given to the patients free of cost. “We try to save as many people through perfect and timely treatment. In Vadodara total eight deaths were reported and 80 are under treatment. 58 of them are discharged from the hospital and rest of them are taking treatment in the Swine Flu wards. We are also in contact with the central government and in the coming days we called a team from there to guide us in the fight against Swine Flu,” said Rupani.

After Vadodara he left for Rajkot and then Ahmedabad to check the civil hospitals ready to fight Swine Flu in the state.