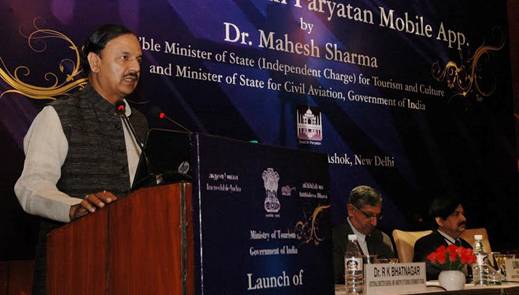 “Swachh Parayatan Mobile App” was launched by, the Minister of State (I/C) for Tourism & Culture and Minister of State for Civil Aviation at a function today. This project is being implemented by the Ministry of Tourism, Government of India through DeGS and NIC. This Mobile App is available on Google Search Engine as ‘Swachh Paryatan’ and initially it is available on Android Phones and very soon it will be available on Apple and Microsoft also. This mobile app shall be monitored by the Project Monitoring Unit of Swachh Bharat Mission in Ministry of Tourism.

Addressing on the occasion, minister said that since the general public and the tourists are the largest stakeholders in keeping the monuments clean, the Ministry of Tourism has decided to facilitate the general public to communicate their complaints about any unclean area/garbage piles in and around tourist destinations. Hence as a part thereof, the Ministry of Tourism is launching this Mobile App. He opined that till all stakeholders don’t contribute, such project will not succeed.

The Minister informed that the recently launched Tourist Infoline is getting 18000 responses daily and is very successful. He dwelt upon many initiatives launched by his Ministry for the benefits of Tourists. He said that the Domestic Tourism has also immense opportunities like International Tourism. That is why the suggestions from public and tourists are solicited on this Mobile App.