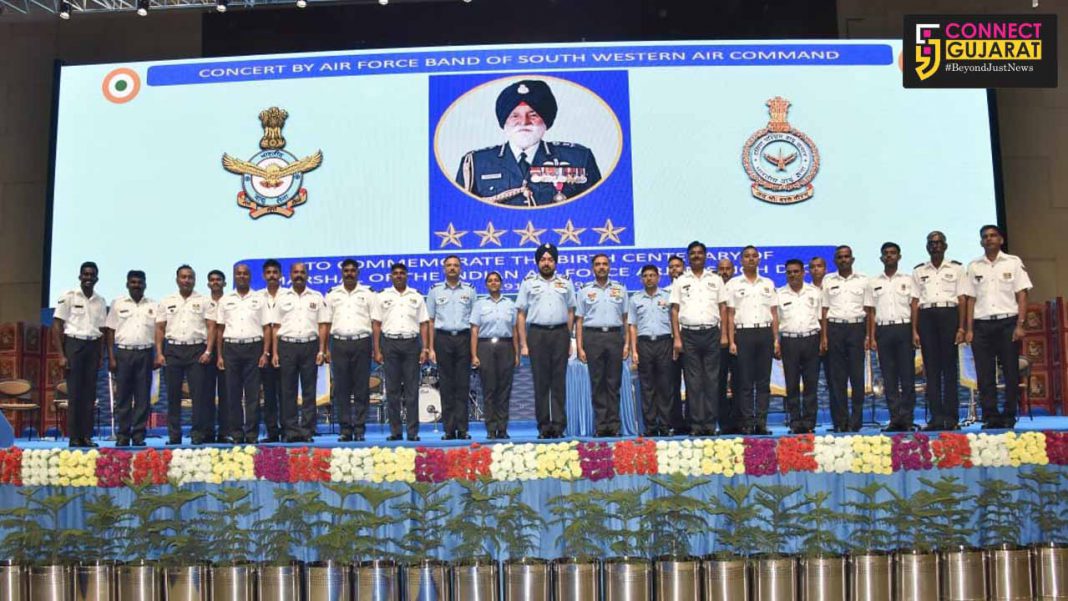 South Western Air Command organised a IAF Band Convert to commemorate the Birth Centenary of the one and only Marshal of Indian Air Force, Arjan Singh, Distinguished Flying Cross. The concert was held at Mahatma Mandir Complex, Gandhinagar graced by Governor of Gujarat OP Kohli and numerous other dignitaries from Civil and Services.

The event started with a montage showcasing the achievements and life history of the Marshal. The IAF SWAC Band, thereafter, reverberated the surroundings with their melodious tunes. The performance by the Band included assemblage of martial tunes along with jingle of old and new melodious compositions both in Hindi and Gujarati. The rendition was exceptional and truly showcased the wide-ranging talent of air warriors.

Earlier Air Marshal HS Arora AVSM ADC, Air Officer Commanding-in-Chief, SWAC welcomed all and highlighted about all air warriors take pride in imbibing the ethos of the Marshal of the Indian Air Force. He also assured the gathering that while IAF is ever prepared for its primary task of guarding the skies both in peace and war, it was equally committed to serve the fellow citizens in any situation that requires presence and participation of men and women in blue uniform.

The occasion marked the reflection of the life time achievements of the Marshal of the Air Force whose contribution to India’s military history will always be remembered by generations to come.

The Governor lauded the efforts of IAF both professionally and socially, and applauded the IAF SWAC Band for their outstanding performance. The event concluded with the presentation of specially created IAF mementos by Air Marshal HS Arora AVSM ADC to the Chief Guest Hon’ble Governor.

The audience truly enjoyed the enchanting melodies played by the IAF SWAC Band as well as the display of IAF equipment organized at the venue.