The Navy and police went on high alert after some locals reported that masked persons armed with guns were sighted in the coastal town of Uran near Mumbai on Thursday.

According to sources The Navy is on a high state of alert after getting this input ,The first tip off came from some school children at Karanja in Uran. 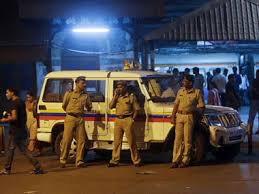 Maharashtra Director-General of Police Satish Mathur said two students had informed the police of sighting some suspicious men in Uran. & also added tha one student has claimed spotting one person, the other has claimed to have seen five. After this information, multiple agencies are probing it

The news spread like wildfire in Uran and nearby areas, resulting in the closure of schools and colleges for the rest of the day.

The entire town of Uran went on a spontaneous shutdown as a precaution even as Navi Mumbai Police Commissioner, district police and Navy officers went to the spot to verify the students’ claims.