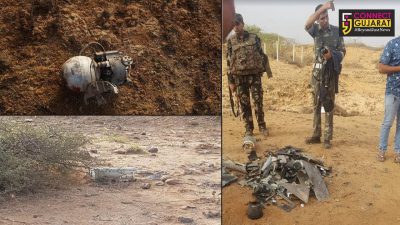 Investigating teams reached the spot to access the details.

As per reports a suspicious flying object was shot at near Nunghatad village in Abdasa at Kutch on Tuesday. The villagers rushed to the spot after a big thud like sound and saw the wreakage and informed the police and defence personnel. A IAF team is said to be reached the spot to check the object which the people claimed to be a drone.

After the morning attack by the IAF fighters and now the suspicious object shot down at sensitive border area, the security agencies are on high alert in the state.