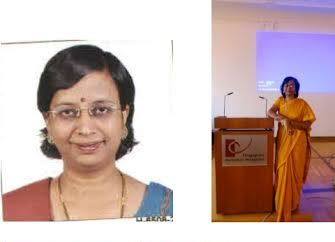 Triple gold medalist Dr. Arti G Bhatti has recently finished her Ph.D. under the guidance of former dean & VC Prof. R.G Kothari. She completed M.Sc. with first class and M.Ed with distinction from The MSU. Her work in Ph.D and also in M.Ed was on women education.

She received Dorothy Lee Grant from GWI (Graduate Women International) Geneva, to conduct research on international women students of London. She worked as an honorary research associate at QS world ranking one-Institute of Education, University College of London. Under DAAD scholarship, she completed one semester in Germany in 2013, and later went there as a guest speaker in 2015.

In her doctoral work she collected a huge data from 1510 women students of The MSU, with an objective to study their challenges. Findings of the study indicated that 54% faced discomfort in the first year of college as they missed the school like environment, found it difficult to mingle with new friends and also because all the teachings in MSU is done in English only. 34% of the women students attended tuition classes to score well

Majority of the women students (74%) felt a need of special subject be added for women students that could be related to study of “Indian culture” and “Theology”, “home and family management” apart from “self defense techniques”.

Majority (84 %) of the university teachers took the classes regularly, completed their syllabus on time and is co operative.

22% of girls believed that gender discrimination is most common reason for low participation of women in higher education while equal number believed that financial crisis could be the reason.

In the families of 20 % of the girls, their brothers were given undue importance, and the girls faced discrimination regarding rules to be followed

Few (22 %) of the women students did not participate in class room discussions because they felt shy, lacked confidence and feared that boys would make fun of them.

49 % of respondents said that they were hesitant to ask or inquire something in presence of male staff. Girls got emotionally disturbed and that thus affected their studies when they had a break up (34%) or when they noticed that friends were either financially better or academically better or had a liberal family. (54%)

Majority of the women students (73%) felt safe to move alone not only in university campus but also in the city.