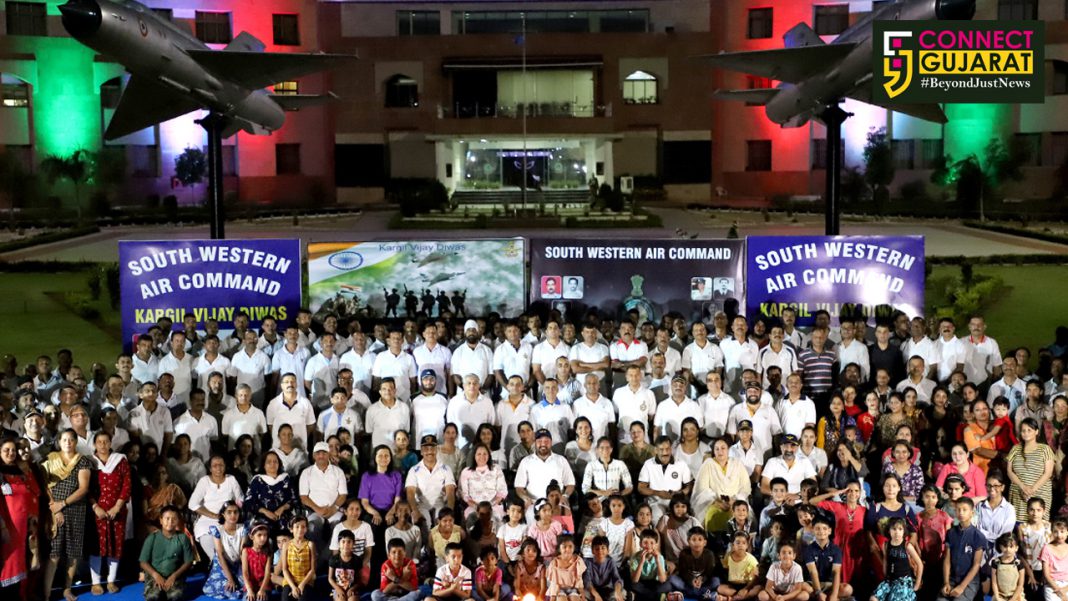 To commemorate the 20th anniversary of Kargil Vijay Diwas and mark the victory, South Western Air Command, Air Force celebrate the day with series of activities at Vayu Sena Nagar, Air Force Gandhinagar. The objective of these celebrations is to evoke feeling of patriotism especially among the youth and to pay homage to the valiant air warriors.

This day is pride for the Nation and to remember the martyrs, revere their sacrifices and strengthen the resolve to the cause of the nation.  The IAF draws the strength and motivation from the unflinching support of their countrymen.

The celebrations are started with a 28 km cycling expedition flagged off by Air Marshal HS Arora AVSM ADC AOC-in-C HQ SWAC with the main motive of spreading feeling of patriotism among the local populace.  In the evening special forces demonstrated slithering from hovering helicopter simulating battle area and demonstrated various tactical attack patterns.

Air Marshal HS Arora and Baljeet Arora President Air Force Wives Welfare Association (Regional) along with all Sanginis, air warriors and their families reaffirm the cause in a candle light march organized in HQ SWAC area.

The efforts were to reach out to population to make them aware of contributions of armed forces in national security and nation building.  The saga of Kargil war was retold to the people commemorating the supreme sacrifices of armed forces personnel.  The complete program was aimed to infuse confidence towards IAF and to motivate youth join the Armed Forces at large.

HS Arora on this occasion reiterated  that we ‘remember’ our martyrs, by revisiting their sacrifices and instilling pride and respect among us, we ‘rejoice’ by celebrating the victory in Kargil and we ‘renew’ our resolve to safeguard the honour of the tricolor.”