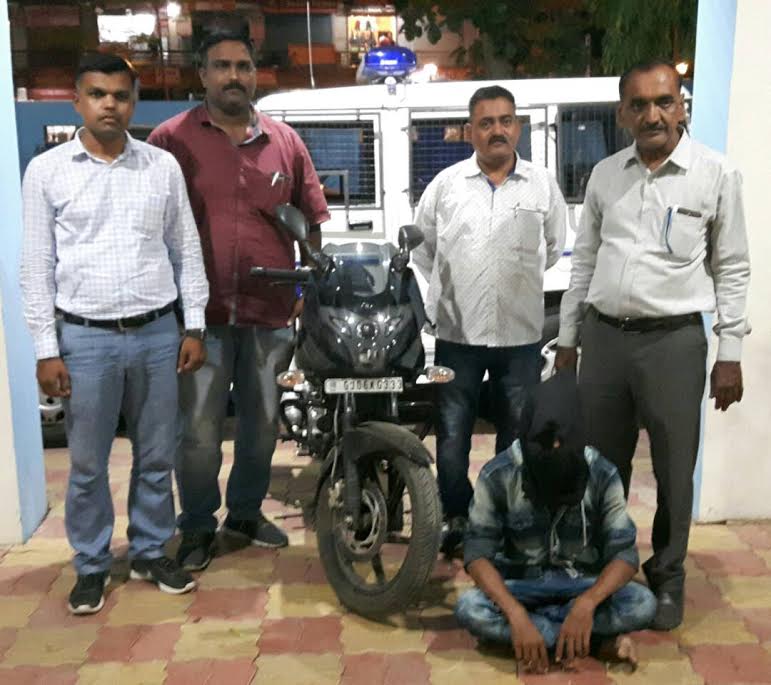 Vadodara SOG team arrested a notorious motorbike thief from Vadodara along with a stolen bike from the city. The accused was earlier involved in murder and steal bikes from different areas of city and for that he was arrested and later released on bail. The accused entered the crime world at a very young age of 14 years.

On 19th May the SOG team received the information about Sachin Rajput residing in Jadhaav park at Abhilasha Chowkdi New Sama Road and he was standing with a stolen pulsar at petrol pump near Nizampura bus depot. The team reached the spot and caught the accused with the motocycle. After primary interrogation he confessed that he stole the bike from near Yog Niketan Fatehgunj bridge on 11 or 12th May 2017.

The accused is notorious and earlier involved in many cases of vehicle theft in the city. He entered into the crime world when he was 14 years old. He along with his friend Jignesh Patel took a Vadodara girl to Changodar Ahmedabad and murdered her.

Afterwards he involved in various vehicle theft and pick up two wheelers, four wheelers from Fatehgunj, Sama, Kishenwadi and Raopura areas.Offences were registered against him for around 20 vehicle thefts and later he was released on bail.

However once again he was arrested by the police with the stolen pulsar bike. The team handover the accused to Fatehgunj police station for further investigation.