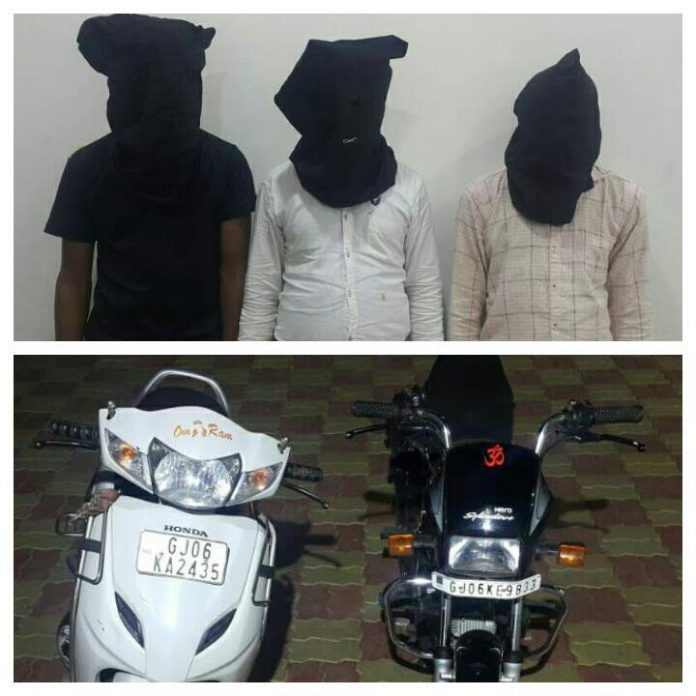 The SOG team on prior information busted a sex racket in Vadodara running in the shade of embroidery work. The accused are using the embroidery work to hide the racket which they are running for the past many months and the girls are specially brought from West Bengal by the accused.

As per the details Vijendra Gupta from Vadodara, Karim Mulla, Abdul Wahab Diwan and Abdul Sardar all from West Bengal kept a rented duplex near Chhani canal where they are running the racket. They brought the beautiful girls from West Bengal and involved them in the flesh trade.

Vijendra Gupta and Karim Mulla strikes the deal with the customers by contacting them on mobile phone or in person and finalised the deal. The accused strikes the deal for 4000 rs per head for the girls, 8000 rs for sending them outside and 12,000 rs for the whole night with the customers. Vijendra Gupta taking care of the girls who are going outside and take them to the customers and bring them back. Abdul Wahab who arranges and brought the girl to the city from West Bengal.

The most interesting part was that the accused runs embroidery work at the first floor to hide the original sex racket which they are running.

Based on the input the SOG team head by incharge PI H.M. Vyas send a dummy customer with the money to the accused house and kept a watch outside in traditional clothes and private vehicles. After the green signal by the dummy customer the SOG team waiting outside raid inside the duplex and caught the three accused with the deal money along with seven girls.

Police caught Vijendra Gupta from Vadodara, Abdul Wahab, Abdul Sardar from Pargana West Bengal and recovered 4070cash, the deal money of 4000, five mobiles, 15 condoms, one activa and bike each from them. The main conspirator Mulla Karim Ahudali from West Bengal was away for some work and the police handover the others to the Mahila police station for further investigation.

During primary investigation the police came to know that Mulla Karim and the other three rented the duplex one year ago which is in the peaceful area. They are running the embroidery work to hide the sex racket from the people living nearby. The pimps kept the hot pics of the girls in their mobile phones which they use to lure the customers. They then strikes the deal and using the first floor bedroom for the sex racket and also using the two wheelers to taking the girls to the customers who want them outside.

The team SOG also found seven girls in the age group of 20 to 24 years and released them from the clutches of the accused. The Mahila police also helped the team in the operation.