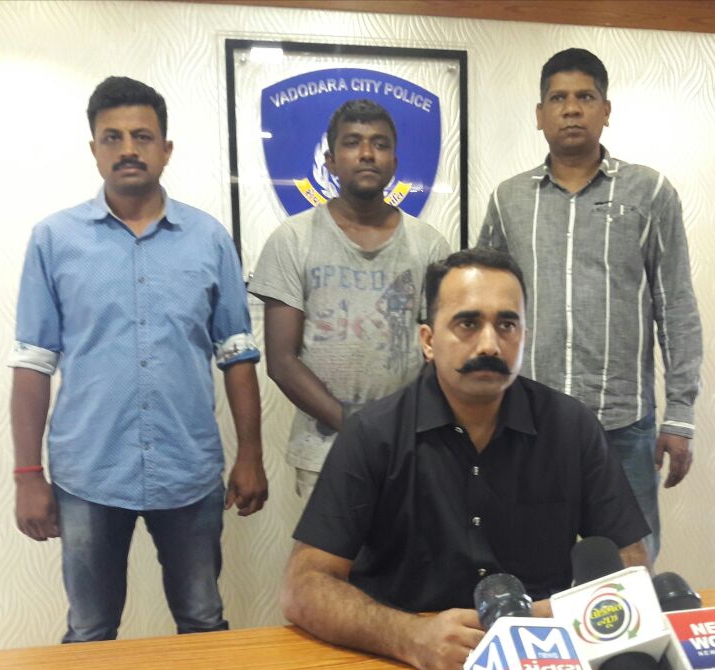 Bootleggers are trying new methods to fool the law and easily running their liquor business. Such a similar case came out on Thursday where the notorious bootleger from Vadodara city turned the tempo into punjabi body type where the liquor placed inside and covered with a sheet. The upper part of the tempo inside was filled with vegetables to hide the liquor inside the cabin under the sheet.

The Vadodara SOG team successfully arrested the carrier working for notorious bootleger Dashrath Kahar from Vadodara when he was transferring the liquor from the tempo inside the car belonged to the bootleger. The team also recovered foreign liquor worth around 1.88lakhs from the spot. Incharge SOG PI H.M. Vyas and his team during patrolling recieved a tip about the notorious bottleger Dashrath Kahar resident of Navapura is involving in liquor trade and a IMFL laden tempo no. GJ 6 AX 2900 was standing inside the closed Sardar market in front of Kevdabaug . The liquor was transferred into the car no. GJ 6 BA 368 of Dashrath Kahar. The SOG team recovered IMFL of total 755 bottles of different well known brands worth 1.88lakhs along with the tempo and the car total equal 6.88lakhs. The bootleger Dashrath Kahar changed the tempo into a Punjabi body type where the liquor was placed inside secretly in a make shift cabin covered with a sheet with vegetable boxes above to hide. The SOG police registered the case against the Carrier, bootleger Dashrath Kahar, supplier and tempo provider in the Navapura police station. During primary Interrogation the carrier Kadar Sindhi said to be associated with the bootleger Dashrath Kahar for last three months. Kadar was earlier arrested under prohibition and also sent for two time under PASA in Jamnagar and Ahmedabad in detention.