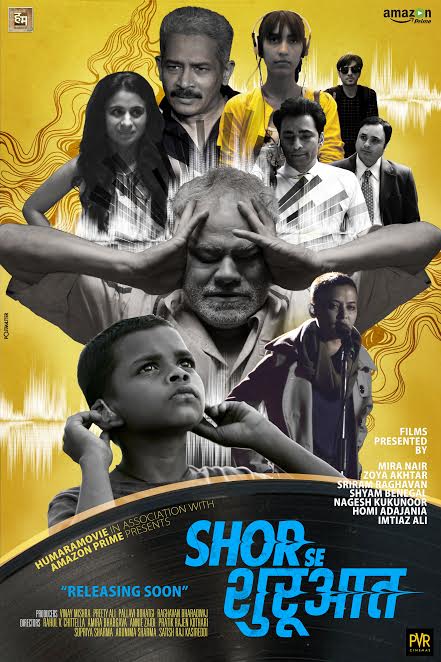 When seven astounding directors come together to guide talented minds, the result is a gem like Shor Se Shuruaat the movie schedule to release on 16th December 2016.

The film is a collection of several short stories revolving around a theme that is as simple and eloquent as ‘noise’. Power-packed performances from actors like Atul Kulkarni, Sakshi Tanwar, Sanjay Mishra is what make the film worth a watch.

Each filmmaker in  Shor Se Shuruaat has a unique, carefully crafted take and one can see the influences of the respective mentors in their approach. Be it Imtiaz Ali’s love for travel which is visible in his movies or Homi Adajania’s fun and quirky mood which is subtly filled with a deep sense of intellectualism, or Mira Nair’s simple tales which are structured in various levels of context. All these young filmmakers suggest that the next generation is on its way.

Celebrated Filmmaker Mira Nair praised the movie and says, “I think Shor se Shuruaat is a way to bring in new collective voices and of modern and contemporary India and just in a portrait of this crazy globalizing for better or for worse country of ours. It’s a real opportunity to look at what the young people are thinking. And also I think that our medium in India has become so sophisticated that expect high standard and I expect to be entertained hopefully and you know to be provoked to be thinking about the things in a different way.”

Showcased at prestigious film festivals like MAMI and SAIFF, Shor Se Shuruaat presents how each director blends noise in the simplest of stories, and puts it across impeccably, making the film an absolute must watch.