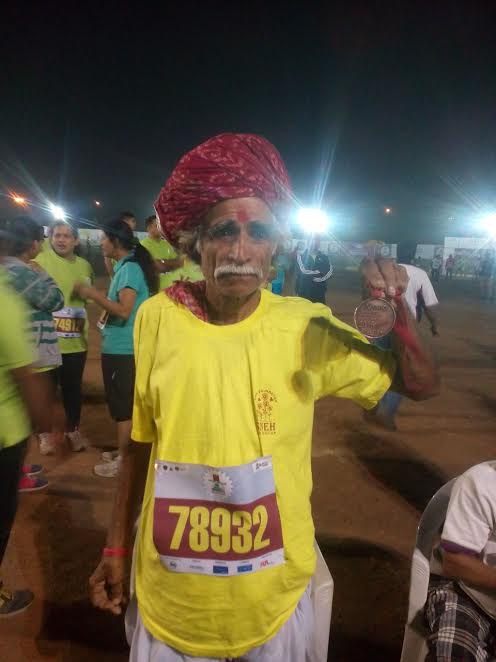 Two senior citizens of above 70 years in this year Vadodara Marathon run to motivate the youngsters who somehow not caring about their physical health. 72 year Kaluram Rawal from Rajasthan run on the track with bare foot after his shoes broke and 77 year old Divyang Rameshchandra Shah took part in the Marathon for third straight year.

Kaluram Rawal from Shirohi Rajasthan came all the way to the city to take part in the Vadodara Marathon for the first time. He always make it a point to take part in Marathons and cycle races wherever it organises in the country.

He said that in short of any guidance he ran 5-5 kms two times on Sunday. As far as running with bare feet he said his boots were old and teared in middle of the run, so he continue his run after kept them aside outside the track. Kaluram has completed cycling from Kashmir to Kanyakumari and said that to give the message of harmony is his prime focus. He said he has five sons and four daughters in the family along with his wife and all are away from any bad habits. He has the passion of running in him which encourage him to come to Vadodara Marathon this year.

Another senior citizen 77 years old Divyang Rameshchandra Shah took part in his third consecutive Marathon this year. Working as a manager at petrol pump at Ranoli Shah said that he wants to motivate the youngsters to run for healthy life. If a person like him can run then why not they run.

Rameshchandra Shah said that he is not Divyang from birth but a freak accident ten years injured his leg and since then he is walking with the help of stick. He feel happy to run in his third consecutive Marathon.