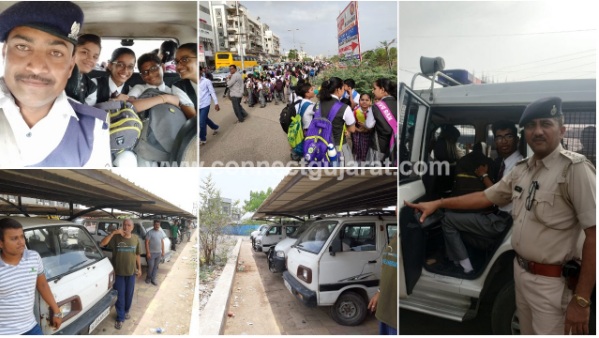 Traffic police came to rescue dropped them to their schools safely

The fight about rules between RTO and school van association took it's toll on the students as they have to face problem in reaching their schools. On Friday in one such incident the school vans dropped around 150 students due to RTO checking. However the traffic police came to the rescue of the children and dropped them to their schools safely.

Based on the Ahmedabad incident RTO and police department cracked down on the school vans operating without taxi passing. With no extension in dates the teams on Friday starting detained the vans which surprised the drivers and they dropped the students in middle of the road and left. However the traffic police department reached them and safely dropped around 150 students from Sama area to their respective schools in their vehicles.

On Thursday a meeting was held between the school van association, RTO and police department where the demands of van leaders were denied. On Friday the van drivers operate as per routine without the taxi passing and came to the notice of RTO teams gathered at scheduled spot to detain them.

They detained around 12 vans and send them to the RTO office and the traffic department dropped the students safely to the schools after the van drivers dropped them mid way.

School van association president Jeevan Bharwad said home minister Pradeep Sinh Jadeja declared through media about the extension in passing date and issues guidelines to RTO not to detains vans till then. However the RTO detained around 12 vans on Friday and brought them to the office. They decide not to pay any fine to the RTO in any condition.