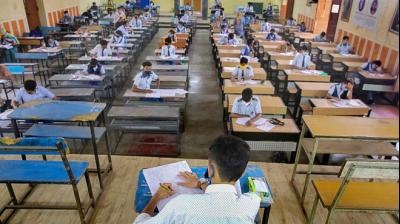 The Supreme Court on Friday adjourned the hearing of a plea seeking directions to the Centre, Central Board of Secondary Education (CBSE) and the Council for the Indian School Certificate Examination (CISCE) to cancel the CBSE, ICSE Class XII examinations till May 31.

A bench headed by Justice AM Khanwilkar adjourned the hearing for Monday while observing that the government is likely to take a decision on the exams by June 1.

"Be optimistic. Maybe, by Monday some resolution will be in your favour. We will hear the matter on Monday," the bench told the petitioner.

It also asked the petitioner to serve the petition copy to the CBSE, ICSE and Centre and said they should be represented by their respective lawyers.

The plea has asked the court to set aside the CBSE and CISCE notifications dated April 14, April 16 and April 19, issued only in respect of clauses dealing with the postponement of the Class XII examination.

The petition filed by advocate Mamta Sharma asked the court to devise an objective methodology to declare the result of class XII within a specific time frame.

It asked the court to pass the similar orders/direction which was passed by the court in similar circumstances caused to Covid-19 pandemic last year where it directed the respondents to compute and declare the result of class XII students on the basis of their earlier grading as their main grading after their final examination had been postponed and could not be conducted due to unprecedented situation caused by the pandemic.

The plea has stated that for the "innocent students of class XII", "step motherly arbitrary, inhuman direction" has been issued to postpone their final examination for an unspecified duration.

"In view of the unprecedented health emergency and rising numbers of the Covid-19 cases in the Country, the conduct of examination, either offline or online or blended in upcoming weeks is not possible and delay in the examination will cause irreparable loss to the students as time is the essence in taking admission in higher education courses in foreign universities," plea said.

It added that delay in declaration of result will ultimately hamper one semester of the aspiring students as admission cannot be confirmed until the result of Class XII is declared.